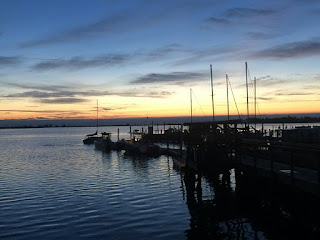 As offshore fishing often does, the day started out early.  It was a pretty morning: 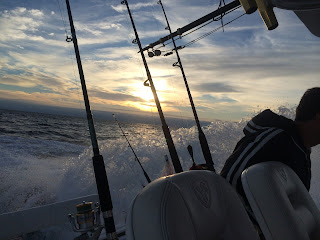 Although I hate getting up early in the morning, I do love the sunrises leaving the harbor.  Great to be alive and on the water. 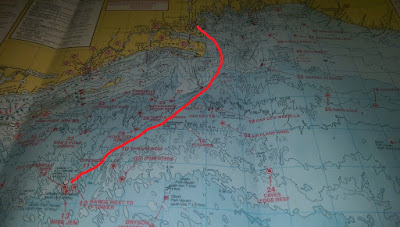 Our destination this morning is "O Tower".  It's about 35 nautical miles from Panacea, but really only about 20 NM from Carrabelle.  A pretty long way.  I have been farther, but still, it is kind of a long way.  We are hunting grouper and snapper.

On the boat today is ("One Last Cast" Sam, Jim (about to get a nickname in this post), and Chris.

We get about halfway and the wind starts whipping.  I have a following sea, which means the wind is directly at my back.  I have learned to look behind me.  Yep - 4 to 5 foot waves crashing behind me.  Crap - it's going to be a very slow, long run back if this wind doesn't settle down.  I am quickly losing my "bay boat mentality" though.  4-5 ft waves used to scare the sh*t out of me.  Now - not so much.

It takes us exactly 1 hour and 15 minutes to arrive at "O" Tower.  I have never fished here. 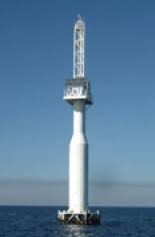 It is hard to tell from the chart above, but supposedly there are three small reefs there.  I like to troll over structure first -  so we do.  Immediately, something big hits the Stretch 30.  Jim brings it up next to the boat.  A huge Amberjack.  Just as Jim goes to lift it into the boat, he feels a small tug on the line.  Out of the water comes only a head.  Right below us is a 8-9 ft shark.  Blood everywhere in the water.  Damn shark.   It is truly amazing how sharp their teeth are.  Its not like they grab the fish and run with it, the just slice right through it like it's butter.

We start trolling again, and it isn't long before Chris and Sam catch two large Kings.  The sharks don't mess with them as much.  They go in the box.  Nice - two big fish in the box and the day is young.

I am still learning how to anchor and place us directly on a waypoint - especially in 5 foot seas, but I attempt it.  My 1st attempt - not so great.  My 2nd attempt - not too bad.  I get us directly on the buoy. Accurate anchoring is extremely difficult, but I am slowly getting better.  The key is determining an anchor heading using the compass and ignoring everything else your senses are telling you about the wind, the waves, and the current.  The compass is your friend when anchoring.

Sam catches a snapper.  Nice!  In the box.  There is plenty of structure below us, but all is quiet.  That bites (pun intended).  We sit here for a while, but no hits on our frozen or live bait on the bottom.  So eventually, we pull up anchor and proceed back to the tower.  We are the only people (fools) out here in these rough seas, so why not.

Recently, I had read in Florida Sportsman magazine (thank you editor guys, btw) a technique where you take live bait and suspend it from a cork about 10 ft below the surface.  I believe the magazine stated that this was a good technique during the calm days of summer.  It is definitely NOT calm today, but I tell my guys that I have a good feeling about it.  We are drifting right next to O Tower.

We are all actually watching the cork when it suddenly disappears and takes off.  And when I say, "takes off", I am not exaggerating.  The line is burning off the reel.

This is the most important part of the post, so I have to set this part of the story up correctly:

Way out here, I have learned from experience to use 80 pound test.  There are big fish out here and I hate losing them.  So all my deep sea reels either have 80 pd test or 60 pd Dacron line (Thanks Russell, that really is excellent, albeit expensive line).  But I do keep some spinning reels on the boat for casting.  They typically only have 15-20 pound test on them...  Anyway, I will now return to: The line is burning off the reel.  That line is only 20 pound test - that is the reel they used.  Really guys?

Anyway, Jim pulls the light tackle rod out of the rocket launcher and attempts to reel, but for some reason, he isn't making any progress.  I am doing my best to move the boat to keep up with Mr. Speedy Gonzalez fish.  Fortunately, the fish has bolted AWAY from the tower and not towards it.  I can hear the reel drag clicking loudly while Jim is furiously reeling.  Sam reaches over and (according to him at least), tightens the drag.  No improvement.  At this point, there is almost no line left on this reel.  Jim yells, "He's about to spool me".  Ironically, if we had had higher pd test line, we would have had less line on the reel and we would have lost the fish by now.

I gotta give Sam credit here, he actually grabs the line with his bare hands and starts pulling.  Pretty impressive, dude.  Meanwhile, I leave the cockpit, hand Sam some gloves, reach over and "tighten" the drag on the reel.  Jim then says, "Oh, the reel is working perfectly now."  Huh?  Okay, whatever boys.  Righty-tighty, lefty-loosy maybe?  The world will never know.

Just when I think us geeks are getting better at this fishing stuff......

Anyway, on with the story:

Now, the fight is on.  Jim is struggling to get this very strong fish near the boat.  He also has about 400 yards of line to retrieve, but he makes progress.  5-10 minutes go by.  I'm waiting for the line to snap at any moment.  In my unspoken opinion I figure there ain't no way this odd acting fish is being caught on 15-20 pound test.

As the fish gets closer to the boat, I get a glimpse of it.  Bonito?  That's what it looks like in the water.  This, btw, is a bonito: (They taste like crap)

But I have never seen a bonito as big as this fish.  I take another look.  No, it can't be!  It just can't be!  But the big "googly" eye is unmistakable because I just saw it on the cover of this month's Florida Sportsman magazine (which I haven't read yet on my dining room table): 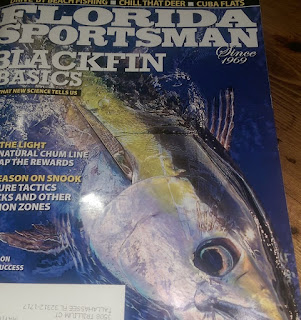 We have caught a BlackFin Tuna!  Out of  PANACEA, FLORIDA!: 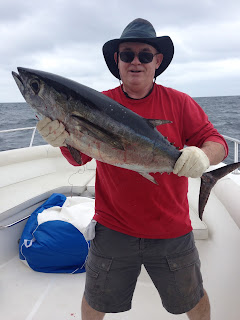 So Jim, I am hereby giving you the nickname of "The Big KaTuna"!  We need to order coffee cups for you.  :-)

Fortunately, Sam has caught a lot of Tuna offshore in Louisiana and he knows how to"bleed the fish" near the gills.  In the box it goes!

If I drank beer on the boat, I would be almost convinced to have one right now.

What the heck was that fish doing in 70 feet of water?

One last story before I let you go:

We are still contending with 5 ft waves but it is time to head back towards home port, so as we leave the tower, we decide to troll a while towards home.  We are about 3 miles from the Tower went something big hits one of our Stretch 30's.  When you troll a lot like we do, you can tell the difference between a large fish and a small one by the way they hit it and the length of their initial run.

After the hit, this thing runs and runs and runs.  Jim manages to grab the reel, but just as he does, he almost gets out the words, "He is going to spoo".  But he doesn't finish the sentence.  The fish spools us.  That was a lot of line.  Sam and I look at each other and say the same thing simultaneously, "That was a big damn fish".  That is the first time I have ever seen a fish spool the reel on the first run without stopping.  No way it was a large king and definitely not an AmberJack.  Sharks don't hit stretches.  That only leaves Tarpon and, yep, I'm gonna go there, another damn tuna.  We will never know though.  Still, it was very interesting - and different.

I love it out here.

As we approach protected waters, the sun comes out and the waves subside to 0-1 foot.  Very nice now, so we take our shirts off, enjoy the sun, chat, troll some more and catch some Spanish Mackerel.  I'll eat those also!  3:30 p.m.  Time to head in.   The boys, understandably, are a little tired: 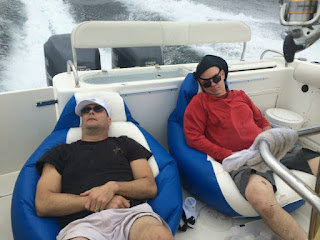 We arrive at the dock and as expected, I get asked the inevitable question,  "Did you catch anything?"

"Yeah, we caught some Kings and some Spanish and a Snapper".

Tyler (Macon's son) likes to give me crap, "Well, maybe someday Capt'n Hook will learn how to bottom fish".  Although he does have a point, I say, "Yeah, that's true.  Oh, did I mention that we caught a Blackfin Tuna?"  I smile.

Tyler replies, "Yeah, sure you did, suuuuuuurrreeeeeee you did, Capt'n Hook."

I make them put my boat on the rack next to the restaurant so people can see what we unload.  I take off the Spanish first, then the Kings.  Mind you, the Kings are rather impressive also.  They are NOT little Kings.  I hear a few "Oohs" from within the restaurant.  Then, I slowly, very slowly, remove the Tuna and hand it to Sam and Jim.

Now THAT gets everyone's attention!

Far be it from me to be theatrical though.  :-)

Here is our board: 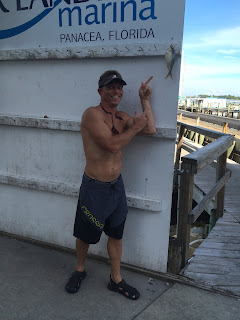 Okay, that is just Sam clowning around. 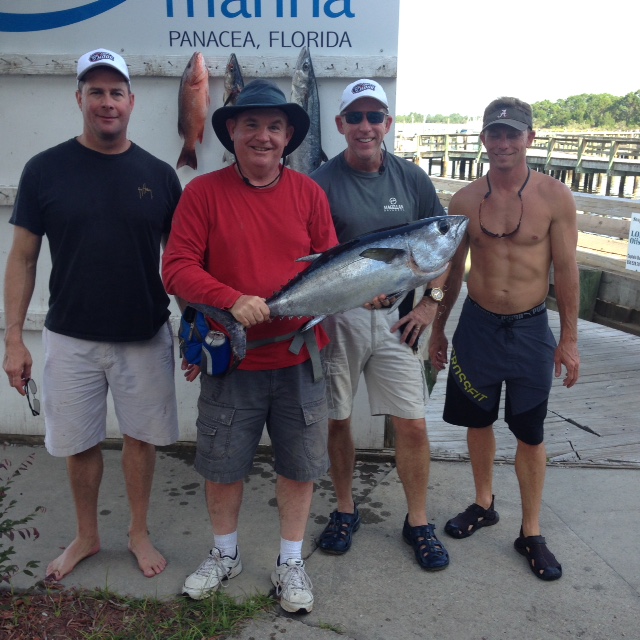 As always, we don't have a LOT of fish on the board (I'll keep practicing), but Macon says they haven't seen a tuna in Panacea in over 10 years.

Sam and I enjoy seared tuna at the restaurant that night, and the next night I serve rare, seared Tuna with soy sauce for Terri and Delaney at the dinner table along with grilled lemon and herb snapper, pan-fried, butter and almond encrusted Spanish Mackerel, and grilled King with Mango and fresh herbs.  If you are wondering, yes, it was all quite tasty.

Thanks Chris for doing such a great job cleaning the boat.  You are welcome back anytime.
And thanks, as always Sam, for taking great pictures and being a good friend.

People often ask me - "Hey Marc, how do you launch your boat?"

Years ago, I learned an excellent quote from Mike Wilson:  "Boat trailers are God's true test of men".

Many of my friends (Gene) will attest to that quotation.

I hate boat trailers.  Something always goes wrong when you pull boats on them.  When the day comes where I can't afford to pay someone to place my boat in the water from a lift, I will sell the boat.  Go ahead, make fun of me, but if you ever want to drink a few beers and watch an entertaining, free show, just take a lawn chair down to a public boat ramp on a busy summer day and watch people launch their boats.  Then, you will understand my preference.

I have a friend named Darrh Bryant (pronounced "Dare" who also happens to be a great dentist).

Anyway, he has a BIG Contender and he apparently isn't afraid to trailer it.  He is much more ballsy than I.  Recently, he and his friends (my invitation must have gotten lost in the mail) trailered his boat all the way from Tallahassee to the Florida keys for a weekend of fishing and lobstering.

I heard he blew a tire on the way down, but had it fixed within minutes.  Very impressive Darrh!

I'll be back with a new blog soon.