If you know me at all, you know I don't really care for February - especially from a fishing perspective.  Almost always, without fail, February is cold, rainy, windy, nasty, and nasty (even in Florida).  Once again, I used "nasty" twice on purpose.  If only the month was as colorful as the graphic I have used here for February.

But God (or St. Peter, the fisherman), must be feeling kindly towards fisherman, because this is the forecast for the weekend - in mid-February: 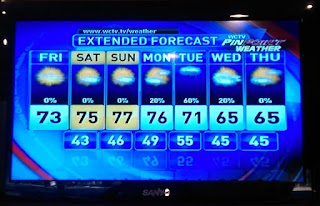 Really?  75 degrees, little wind and sunny skies all weekend?  Okay, gentleman, I'll take that.  So I sent out an email to everyone I know and said, "Let's fish".  Okay, I also used some profanity at the end of that sentence, but it was in a loving way.

Many people were busy, but a few were not.  So for the weekend, we have Charlie, Jim, Gene, Action Jackson, and Coco (my dog) - and me.

Coco has been on some fishing trips with us before, but it has been freshwater - not saltwater.  I'm not exactly sure how she will handle being offshore.  At the moment though, she looks pretty excited to be getting away from our other crazy dog Midnight: 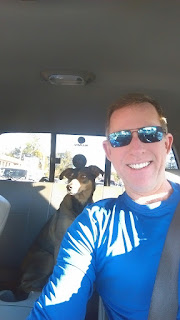 Now the "high" may be 75 degrees, but at 9 a.m. (or should I say, 9:30 a.m.  cause we had a "Gene" delay.  If you hang with Gene, you will encounter these often).  However, before I trash Gene too much, he just fixed all my electronics, so the only reason we are going at all is due to him.  I tell myself that while I am "patiently" waiting.  It isn't helping.

We leave the dock.  It is still about 50 degrees.  On the water, that number is more like 45 degrees, and with the wind hitting you at 40 MPH, it feels more like 35 degrees heading out.  I'm not sure who is giving more comfort to whom, the dog or Gene: 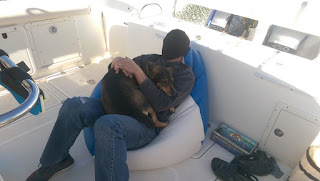 As usual, Action Jackson likes to take the co-pilot seat next to me.  I think I am going to teach that boy how to be a Captain soon.  He sure doesn't need any tutelage on fishing - he is pretty amazing at that: 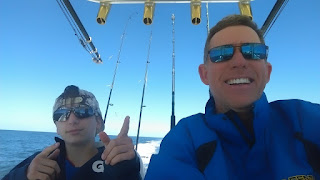 Specifically, we are seeking "Red" Grouper.  They are about the only species open in Federal waters. Red grouper are known to live near "S" tower.  That particular tower is about 50 miles away.  If you have been on an offshore boat in moderate waves, you will understand that that is a long way. Regardless, that is where we are determined to go.  100 feet of water, 50 miles offshore - in February.

Have I mentioned that I am not a patient man?  I quickly return to: "February sucks".

I fished S Tower twice during the summer so I actually had a few waypoints of my own.  So we headed to one of them and started catching some small lane snapper.  Those are pretty tasty (and legal) so they went into the box.  We also caught some red snapper.  Those are very tasty also, but they have to go back into the water as I really don't want to pay the exorbitant fines associated with returning to the dock with a species that isn't open.  Here are a few though: 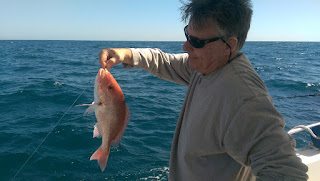 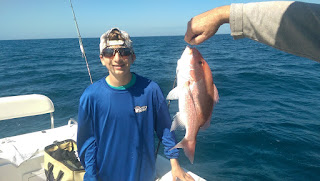 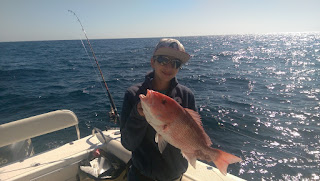 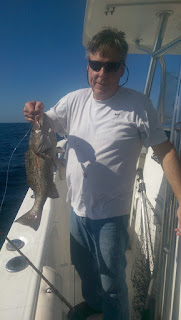 The 4th is actually a "Gag" Grouper.  Can't keep those either.  Sorry Charlie.  Okay, I apologize for that last sentence, but you just knew that I had to use it once in this blog.

Charlie is an excellent fisherman.  He knows a LOT of techniques and tricks that I don't.  It is really the only reason I took him. :-)  I learned a great deal from him this trip.  Anyway, he convinced me to "back" the boat into a spot, not approach the waypoint with the bow.  I didn't believe him at first, but I tried it.  Now I'm not exactly saying it's easy, but it is easier than going bow first into the wind.  It is kind of like a video game: 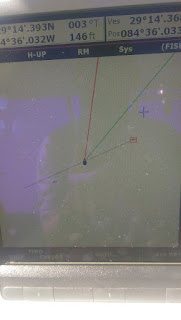 The little red fish on the left is Waypoint #1, the red fish on the right is Waypoint #2, the dotted black line is the linear line I am trying to stay on.  The boat is facing 5 degrees; the red line.  The green line at 30 degrees is the "drift" of the boat.  Factoring in the wind coming in at 90 degrees, the 4 ft waves, the current which is hitting me at 115 degrees, a 5000 pound boat with five guys on it, and the position of the tower 2 miles away, it all becomes quite easy to keep the boat on that damn dotted black line, right?  Wrong.  Man that is difficult.  I wish I had studied harder in geometry.  But I gotta say, after some practice I did get better at it, even in relatively rough seas.  NO anchoring!!  Wow, just not having to drop the anchor in 100 feet of water saves a ridiculous amount of time and effort.  Thank you Charlie, once again, for that advice. And thanks again Gene for my improved electronics - whatever we did.

See the blue and red stuff near the bottom?  Those are fish, and that is what I am trying to keep us over.  Of course just because there are fish there, doesn't mean they are feeding.  It is still February: 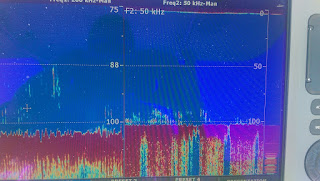 But anyway, enough about navigation, you read (or at least scan) this blog for pictures of FISH - I know.

So while I am doing my best to keep the boat stationary, I hear some grunting on the port side.  It is Action Jackson.  He has something big on the line.  His pole is bent over (a lot!).  He is old enough now to catch fish unassisted.  Another crewmember will assist with the gaffing of course, but the fight is his to bear alone.  He either catches the fish, or he loses it - by himself.  It takes him about 10 minutes, throughout which I hear more and louder grunting.  I chuckle in my chair.  It is moment's like this where I simply love fishing - even if the pole isn't in my hands.  What kind of fish is it? Don't know, but we DO know it is big and even though he is struggling like hell, I know he is loving every minute of it.

Okay, here it is: 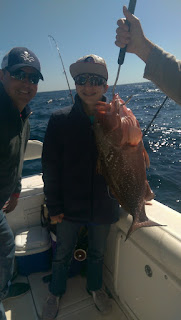 I'm pretty sure the fish's head is bigger than Jackson's.

Nice fish Jackson, do it again.  But he doesn't, his Dad does: 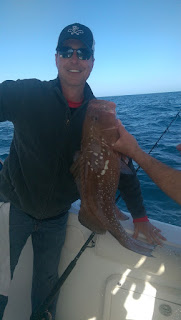 Showoff.  You just can't let your boy have all the glory can you. 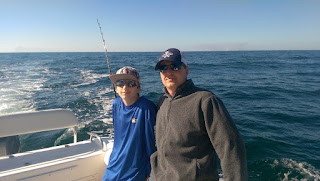 Jackson, have I told you how awesome you look in that Capt'n Hook shirt?

Gene loses a big one so I'm pretty sure we would have had another large RED if the line hadn't broke. Honestly, I'm just happy we are catching anything cause fishing in February ain't for sissies.

Jim, what are you doing back there?  Oh yeah, you DID catch the motor.  Alright, yes, that was my fault, but the Big Katuna is quiet this day.  And my sincere apologies Jimbo, I forgot to get a picture of you for today's blog.  Trust me everyone - he WAS on the boat!  I promise I will do better next time.

It is a long drive back so we head in.  The ride back in is chilly also.  I think Gene (pretty sure that is Gene) has found a comfortable and warm spot at the stern: 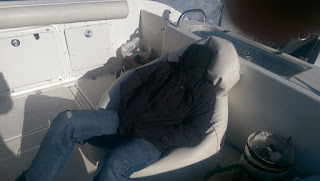 Why do I fish?  Well, there are LOTS of reasons.  It is beautiful out here; when the sun shines the sea looks like an infinity of diamonds; I really enjoy my friends; I love the mystery of it all; I appreciate and respect the riskiness of the sport; and I NEVER get tired of turning around and seeing this amazing view: 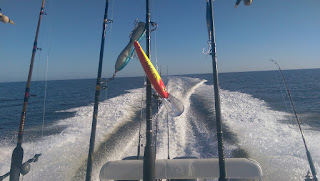 So one last photo to end the day.  Nice BIG RED Action Jackson.  You are the man! 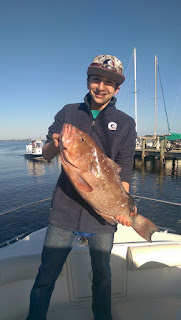 Thank you to my friends who were able to join me on this rare February trip.  As the weather warms, maybe more of you can attend.  I would enjoy your company.