Goals Are a BAD Thing 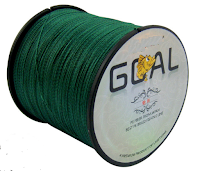 My family has been out of town on vacation for a few weeks now. (I had to work).   I have been all by myself.  So my friends decided to come up from Clearwater for the weekend and fish for grouper. We had a little fun in Tallahassee the night before.  Okay, mostly Nick did: 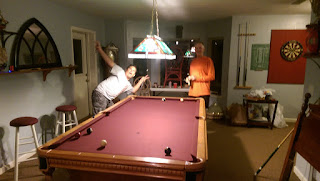 On the boat this weekend is:  Jeff, Gene Jim, Nick, Marc & Mike (Jeff's friend from Clearwater).  It is Friday.  99 degrees with afternoon thunderstorms.  Extremely hot, but not bad conditions. 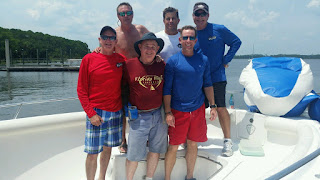 I know what you are thinking:  "Now that is one motley crew of young studs".  I know, we were thinking the same thing when the photo was taken.

Our destination is V Tower.  It is about 35 nautical miles offshore. We head to a location close to V Tower.  I have never been to V Tower - and there is a reason for that - as you will soon learn.  We are seeking gag grouper because they are open in Federal waters.  It is kind of rough out here so even though we are only about 3 miles from V Tower, we don't make it all the way there.  We fish all day at various locations. We catch some rock bass and some key west grunts, but no grouper.  We catch some sharks on a reef, but no grouper.  We lose the very expensive Go Pro camera over the side of the boat, but no grouper.

But Jeff does catch a couple of cool AmberJack. Unfortunately, they are closed, so they have to go back in.  AmberJack are everywhere out here! Why they are closed is anyone's guess. 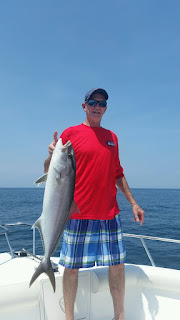 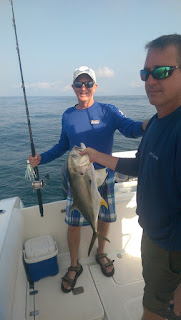 We return to the dock with no grouper.  Grouper fishing is tough.  I don't have the best waypoints out there either.  Like they say, it takes time on the water.  I suppose.  Another way of saying it is: "I suck at catching grouper".

Jim heads home but the rest of us have a nice dinner at Mad Anthony's and drink one or two beers :-) and head back to the crack shack.  It sure is convenient having a place to stay down here so we don't have to drive all the way back to Tallahassee.  The shack still needs a LOT of work, but it is livable (as long as you don't require hot water - gotta get that fixed).

We get up early the next morning and head back to V Tower, but now, my fish finder is no longer functioning.  It is hard enough fishing for grouper WITH a fish finder, but without it, we are basically fishing blind.  And sure enough, we catch no grouper.  We do catch more rock bass and key west grunts though.

But we are VERY close to V Tower.  There is also a VERY large thunderstorm nearby.  I suggest we head back closer to shore.  Everyone else though, disagrees.

Because they know that many, many years ago, when I only had a 17 foot bass boat, I set a personal goal.... And that goal was: "If I ever made it all the way out to V Tower and fished on the other side of it, I would get a tattoo."  All my friends know this.

This season, I have actually been to S Tower (twice) which is considerably farther than V Tower, but in a different compass direction.

So the guys aren't about to let me turn back towards shore.  They also call me a few feminine and non-supportive names which I can't repeat here.  Now that is just plain hurtful.  We head directly to the Tower.  On the other side of it, one of the guys takes this shot of me to prove that we made it around it.  Dammit.  Don't believe what they say in all the business books:  Goals are indeed, a BAD thing. 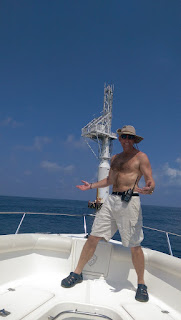 Since we are right next to V, we might as well fish!  We all drop down lines.  Nothing.  Well, not quite, I immediately get a big fish on.  I have the fish almost all the way up when someone on the boat says, "Holy crap, look at the size of that shark!"  We all look.  It appears to be about 8-9 feet. Big shark, no doubt.  Then, I get an odd tug on my line, but I can still feel the big fish moving around.  Huh, that was weird.  I keep reeling.  I bring up a half of an AmberJack that is bleeding everywhere.  The shark has bit him cleanly in half.  Well, that is a new one.

I'm not allowed to keep HALF of an AmberJack either, so I throw him back.  Immediately, a huge Barracuda starts tearing into him, and then the shark chases the Barracuda.  I actually feel sorry for the AmberJack (which is still alive and hopelessly trying to swim without a whole back end).  The shark returns and finishes him off.  There for just a moment, it was a feeding frenzy - and quite exciting.  I suppose that it was all appropriate for my 1st trip around V Tower.  On the way back in, Nick says, "Makes you wonder, doesn't it."

He says, "We are definitely NOT at the top of the food chain way out here."

On the way back in, we kinda actually rescue a couple of divers who have surfaced too far from their boat and are being pushed farther and farther away from it by the strong current.  That was interesting also.  These guys were exhausted and the young girl (the only person left on the boat) wasn't strong enough to pull up the boat anchor to go get them - assuming she knew how to drive a boat.  It was actually Jeff and Mike's idea to assist since they are both divers and they knew the divers were too far from the boat.  Good call, gentlemen.

And this probably isn't worth mentioning in the blog, but shortly after we left V Tower, we were fishing at a spot near K Tower. (Not catching grouper).  Gene opens a box of CrackerJack.  You know the little prize inside?  Yeah?  He pulls it out and shows it to me.  Wanna guess what it is?  Come on....Guess!  Ironically, it's a tattoo sticker with a "V" on it. How cool is that!?  I stick it to the dashboard.  It will last for a while.

Anyway, now, dammit, I just have to pick a fish tattoo for my leg.  Here are two that I am considering: 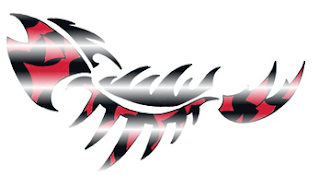 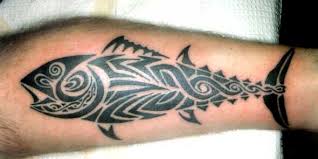 I wonder if I should get one of an AmberJack getting eaten by a shark with a "V" on top?

We returned that night and had a big fish fry at the shack.  Rock Bass and Grunts may not be quite as good as grouper, but they were still damn good.  Especially since Mike created this amazing batter with (according to him), only beer and flour.  I've gotta try that again.  That was awesome in the fryer.

So thank you very much to my pals for making the trip all the way up here.  You guys are cool and that was an amazing weekend. 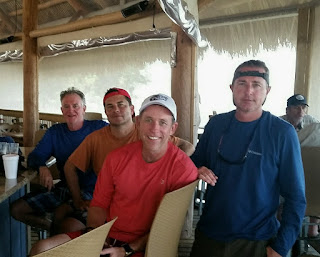 For everyone else, thank you for reading.

Oh, and if you haven't checked it out yet, the website is making considerable progress at: www.captnhook.fish.  You will find ALL these blog posts there also.

I'm headed to San Francisco with the family soon.  Won't fish or post for a while.