I know, you thought I had gone away forever, but I haven't. I'm back!   I fished some over the winter, but as many of you know, especially those of you who live in the Northeast, this winter sucked in regards to rain, snow and wind!  Storm after storm after storm.  Geez.  Global warming, indeed.

So it was a relatively quiet winter in regards to fishing - in North Florida.

But now - Spring is here!

There are actually a few of you who have assured me you like my fishing blogs, so I will try to do a better job of keeping up with them this year.

I still own the Triton, but soon, I would like to be in the market for a bigger boat. Why?  Because they are almost done with the new bar at the Rock Landing Marina and I want a boat that I can sleep on after I stagger away from the bar.  It is quite simple really.

Experienced fishermen tell me that the best way to learn how to fish is to spend time out on the water.  Usually when I troll, I use stretch 25's or stretch 30's.  But there is a reef that is only 5 miles offshore called Rotary Reef.  Only about 21 feet deep there.  So I thought, hey, why not use stretch 15's or even some freshwater lures with small bills on them.  Leading up to that:

A few weeks before my family and I were travelling around Florida looking at colleges for Cameron Paul when we came across some old flea market in the middle of nowhere.  In the back of the flea market there was an even older bait shop.  Lots of very old, dusty lures.  I came across a strange one, made out of plastic, manufactured in about 1977.  It looked cool, so I bought it.

Two weeks ago, Caroline and I were on the boat.  It was rather windy (as it always seems to be), and it was still very early in the season (early April), so there wasn't a lot of activity out there.  We trolled across Rotary Reef a few times - it was the end of the day.  We had caught a lot of silver trout earlier in the day, but they were all pretty small.

I had that strange flea market stretch 15 on the port side line.   Just a few minutes earlier, I had said to Caroline, "I am going 'old school' on that lure.  The fish haven't seen that one since 1977.   Sure enough, just a few minutes later, over the reef, the trolling rig started to make that wonderful zzzzzzzzzzzzzzzz sound.  I love that sound, BTW.

Caroline hauled in this amazingly large Spanish Mackerel.  Yes, Caroline also looks amazing as she is obviously "ripped" from her daily workout regimen: 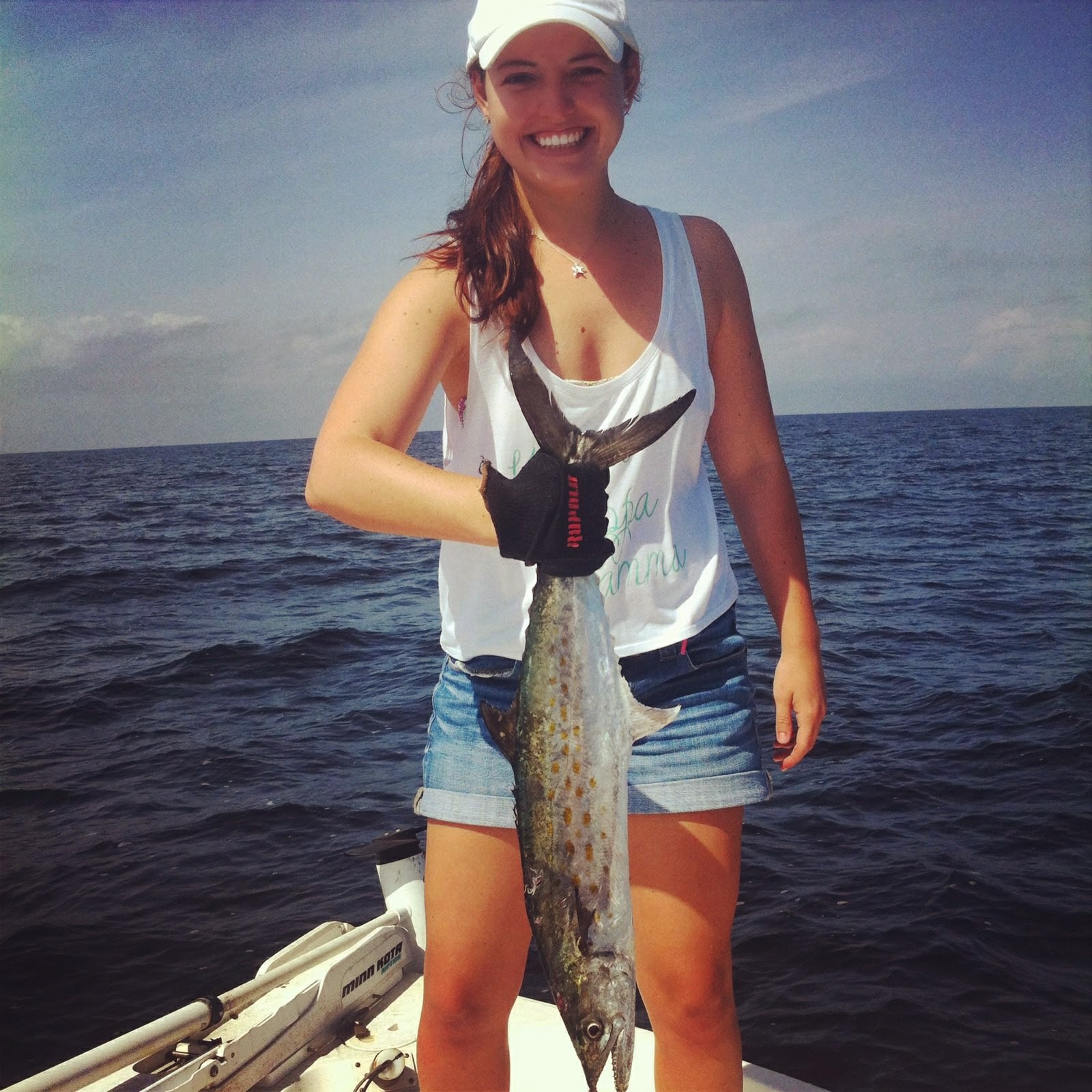 We have caught lots of Spanish, but I have never seen a Spanish this big, and in fact, I was certain it was a King Mackerel based on how long and hard it fought; until we brought it into the boat and saw the spots.  We didn't weigh it, but I'm guessing it was around 8-9 pounds.  Ironically, I got a blast email from FWC a few days later talking about Spanish Mackerel and it mentioned that the state record is 12 pounds.  Damn Caroline, we really should have weighed this thing.  Well, whatever.  It was very tasty on the grill that night.

Oh, and I have heard SO MANY differing views on whether or not Spanish Mackerel are good to eat or not.  Here is my opinion:

I filleted it at the dock.  I immediately placed it on ice.  I actually left the blood line in - won't do that next time.  At home, I soaked the fillets in milk for a couple of hours (gets the fishy smell out).  I then sprinkled some Cajun spices on the fillets, mixed with a little olive oil and placed it on the grill.  So for all the people who say, "Eww, mackerel is oil and fishy and yucky", my family and I call "Bullshit".  It wasn't fishy at all; it was flaky and white and full of goodness.  So we say, "Bring on the Spanish Mackerel!"  Apparently, you just can't freeze them.

The Panacea Rock-the-dock fishing tournament is THIS weekend.  Conditions look extremely favorable for an excellent fishing weekend.  I promise to take pictures and write next week - assuming we catch fish - that is.

My goal this year, of course, is to keep hooks out of my various body parts.

Welcome to Spring, everyone.  Tight Lines