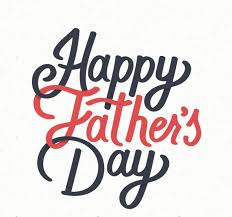 Hello everyone.  I know, I know, it has been a very long time since I've created a fishing blog post.  My apologies for that.  As an excuse, I'll say that my software company has grown quickly from 15 people to 35 people and I'm in the process of moving from a 2000 sq ft building to purchasing a 12,000 sq ft building.  In addition to that, we have already had one tropical storm pass through Tallahassee and we have been having some serious afternoon thunderstorms.  What drops out in the schedule?  Well, offshore fishing, unfortunately.

But as I write this, today is Father's Day and just for today - thank you God - the weatherman is calling for less clouds, less thunderstorms and less wind.  Now the best part?  Well, for me, perhaps not for him, is that Cameron is coming over from Jacksonville to fish.  Normally, that wouldn't be a big deal, but Cameron, in addition to keeping his grades up at UNF, is also working part-time as a bar-back at a night-club called Myth.  He works until 4 am.  Then, bless his little heart, he intends to drive from Jacksonville at 4 am arriving in Panacea, Florida at the dock at 8 am so he can fish with his Dad for Father's Day.  What a great kid!  Oh, to be young again. 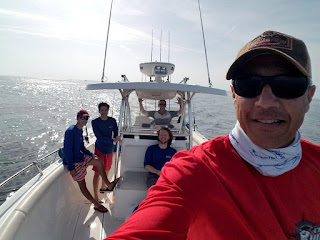 On the boat today for Father's Day is yours truly (somebody's gotta drive the boat), Cameron (he made it safely, btw), Tommy, Mike (Tommy's younger brother who has never been offshore fishing), and Tommy's Dad (Tom).  Two of them have fished with me before.  Tom has agreed to be our official picture-taker for the day.  Thanks Tom!
Fortunately, as I said earlier, Cameron makes it safely and we leave the dock around 8 am.  Sure enough, the seas are pretty smooth out here.  We stop to check my bait traps at the end of the channel.  Full of live bait!  Gotta love that.  Live bait is always preferred.  We pick up the bait traps and head 7 miles offshore to the bait grounds and re-drop them there.  Unfortunately, the ropes I have for them appear to be too short and the buoys are just below the water surface.  I waypoint them, but I may regret that decision as I may never find them again if they move due to the tide - which they probably will.  I am only dropping them out here because my buddies and I are fishing offshore again the week of July 4.  Why didn't I leave them at the end of the channel?  That was dumb.  Anyway, time to head offshore towards to V Tower.
Oh, I didn't tell you yet, we are hunting Red Snapper.  The Trump Administration has increased red snapper season from 3 days (Obama administration) to 43 days.  Thanks Mr. President!  Eight years of a 3-day season was a bit ridiculous.  And yes, that is as political as I will get here.  Time to move on...
On the way out, and before we reach K Tower, which is about 22 miles offshore, there is a reef called Oar Reef.  I like to troll over this reef, cause, well, you never know - and I have to pass right over it as I head to V Tower.  Within 3-4 minutes of trolling we catch a decent sized Spanish Mackerel.  Hey, its dinner if everything else fails.  Let's just hope that everything else doesn't fail.
Not too long ago, there was an "old salt" at Rock Landing marina named Fred.  For a while, he lived on a dilapidated house boat at the dock until a tropical storm took it out.  That guy spent most of his life fishing off the shores of Panacea.  To say that he had a lot of fishing spots would be an understatement.  Irascible at times, but extremely helpful at other times, he, over the years, gave me some of his numbers.  So, the first place we stop is a very small area of his numbers that he gave me - not too far from V Tower.  We are now about 40 miles offshore.  The ride out was VERY easy and the seas were somewhat flat.  In fact, it was kinda creepy because there were times when the water was like ice, with absolutely no wind blowing.  Man, that is weird offshore when it happens - only because it is so rare out there.
We arrive at Fred's waypoint and drop lines.  Immediately, someone, can't remember who, catches a decent size red snapper, then another is caught by someone else, then another, then another.  At one point, we were "tripled up" catching snapper.  Awesome!  These fish are like red ants in your yard.  They are everywhere!  Within 15 minutes we have 5-6 snapper in the boat and at least one red grouper.  We can only catch 10 red snapper (2 per person).  The red grouper is a bonus.  I let the boat drift just a little and within another 30 minutes we have 10 decent-sized red snapper in the boat. 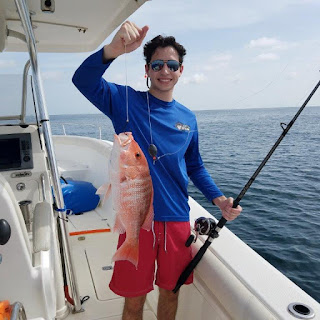 You did a great job out there today, Mike: 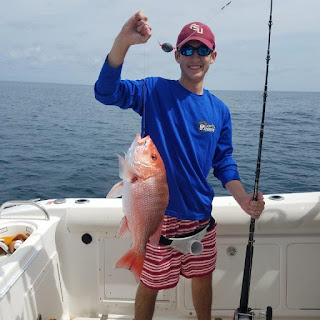 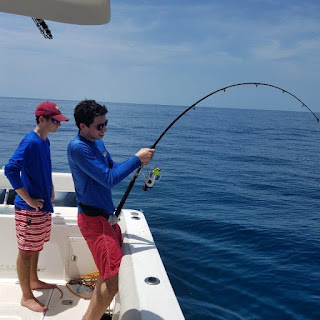 It is only 11:15 a.m. and officially, we are done fishing - well, for red snapper at least.  We could play the game of trying to catch a larger red snapper and throwing the smaller ones back, but that isn't really fair to the fish as their odds for survival after being brought up are rather slim.

V Tower isn't far (2-3 miles away) and we have a live well full of bait fish and the weather is nice.  I ask the boys if they want to head in or keep fishing.  Unanimous... Let's keep fishing!  Okay, let's go have some fun then!

Now imagine that you are a big AmberJack and you live in 100 feet of water.  Its a "dog-eat-dog" world out there.  Well, actually, its a "fish-eat-fish" world out there, but you get the idea.  Imagine that you are swimming around a big tower and you see a helpless little bait fish struggling (a little fish who normally lives in-shore in about 7 feet of water 40 miles away).  You think to yourself, "Self: now that is unusual!"  Then you just can't help yourself, you gotta have it.  Its like candy.  Yep, I'm certain that is what the AJ are thinking.  I speak fish.

Within 2-3 minutes of dropping over our first live bait fish, Wham!  A big AmberJack hits it.  Here are pictures of Tommy with a couple of his: 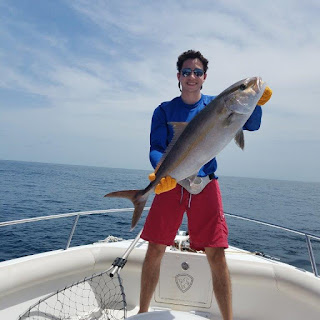 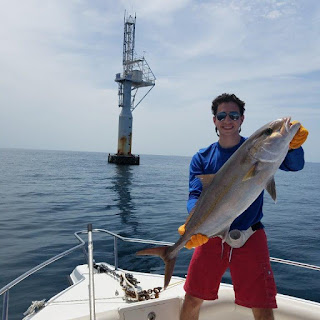 Now I will be honest, I quickly lose track of who is catching AJs because the boat is going crazy with hits.  I think, at one point, we were "tripled up" with AJs.  It often takes 15-20 minutes to bring in one of these fish - if the line doesn't snap or it doesn't get eaten by a shark..  They are strong, and I would argue that they are one of the strongest fish in the sea - and I have caught a few species in my time.  Except for blue marlin, goliath grouper, and large tuna, these fish, in my opinion, are one of the strongest.  You will NOT win the battle for the first 5 minutes. 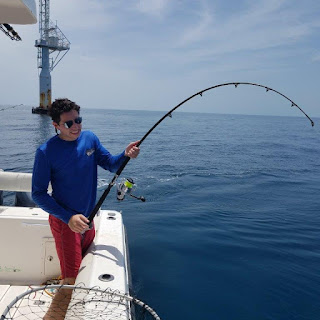 Mike:  You should really concentrate on catching the "entire" AJ.  Try and reel faster than the sharks swim: 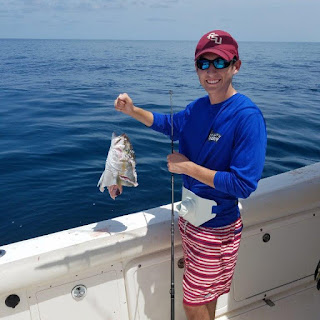 Now imagine that you are a big-a**, mean shark.  You love eating big AJs.  You see an AJ struggling because, unbeknownst to you, he has a strange, sharp, silver thing in his mouth.  A struggling AJ is like candy to big sharks.  So you eat the AJ (The WHOLE thing).  Oops, you quickly realize that there is a problem.  Now you have something in your mouth that is very sharp and painful.  Did the AJ have braces?  And why is some weird force trying like "h", "e", "double-toothpicks" to get you to the surface?

Tommy always has to catch the biggest fish because he is the best at showing off - and he thinks he is the most photogenic.  What we can't show you is how much he was shaking after he landed this monster.  Sharks are extremely strong, and to make it worse (well, for him at least), Tommy obviously started with an AJ, fought that for 10-15 minutes, then the shark ate the entire AJ, then Tommy had to fight the shark for another 45 minutes.  How do we know his fight started with an AJ?  Well, when we finally released this 7 ft shark, he spit up the entire AJ.  Now, THAT was impressive - and a little gross.  The picture doesn't do it justice.  This is a BIG bull shark.  And bull sharks are strong and mean.  Ain't no way this boy is coming into my boat. 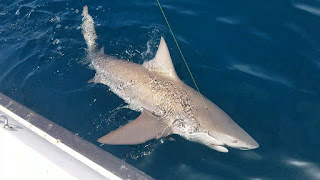 After about an hour of this madness at V Tower, we decide to call it quits.  We can't keep the AJs anyway as they are closed.

I'm just guessing, but I think the Pescatore boys had a good Father's day offshore fishing together.  You boys look fantastic in those Capt'n Hook shirts, btw: 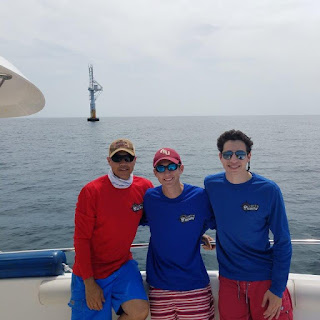 I had a great Father's day out on the water also.  Cameron, bless his heart, really needed some sleep. Thank you again son, for joining us.  I know that wasn't easy for you: 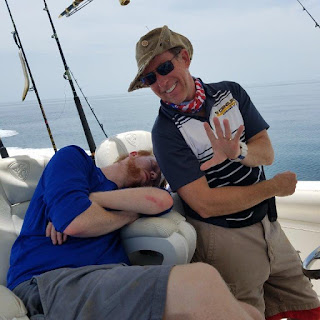 Here is a picture of us at the dock with "some" of the fish we caught: 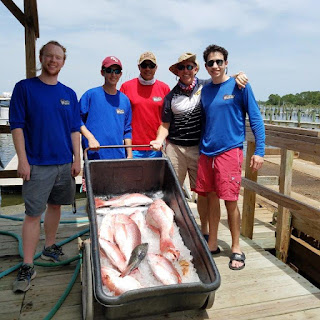 Here is a picture of the family eating some of the fish we caught: 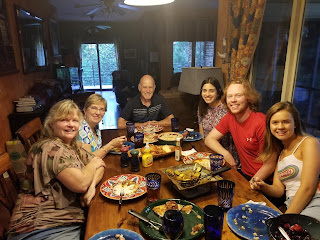 Happy Father's Day, everyone.  Oh, and Lorraine - Happy Birthday.  I am publishing this post on your actual birthday so I hope you are enjoying it with a cup of coffee or a glass of white wine.  I figure the odds of one of those beverages being in your hand while you read this are extremely high.

Thanks for reading, everyone.