Good morning everyone.  It is Memorial Day weekend.  I am home after spending Friday and Saturday at the coast.  I have a sore throat and a fever, but yesterday was a different story.  Here's why:

Oh, before I get started, I should say that two weeks ago, I had my brother Russell on the Triton.  Unfortunately, the biggest story of the day was "the one that got away".  Funny story, and you really should here it from me over a beer, but it can be summed up with, "Don't try and catch a 30 pound cobia on 8 pound test line".  My bad.  Good to have you on the boat again though, bro.  That was fun.

But let's return to this Memorial day weekend.  I spend Friday at the coast messing around and getting the boat ready for fishing on Saturday.  My "primary" Friday goal is to catch "live" pinfish.  I take the truck to Mashes Sands where I have caught them in the past with my castnet, but it is low tide, and I don't catch any.  I decide to try another spot.  Truck won't start.  OMG.  All the way down at Mashes Sands at the end of a dirt road.  The weekend isn't starting the way I would have hoped.  My brother has my back, drives down to get me, the truck eventually starts (fuel pump dying).   I won't waste too many words talking about my truck problems; this is a fishing blog; suffice it to say, I had truck problems all weekend.  But it all worked out.  I am very lucky.  My wife has my back also, btw.  Thanks Terri.

Russell and I make it back from Mashes Sands to Rock Landing Marina Friday night, and I ask Fred, who works at the marina, how to catch live pinfish.  He says, "The easiest way is to go over to my trap - right over there - and take out whatever you like".  Who knew it was that easy.  Have I mentioned how nice everyone is at Rock Landing Marina?!

So the next morning, I get 15-16 pinfish out of Fred's trap.  Okay, probably not a long-term solution to the live bait problem, but for today, I'll take it.  We get an early start, heading out right at 7 a.m.

On the boat with me today (Saturday) are Jim Pittman and Sam Littlefield.  My goal is to get to K Tower and fish for Amber Jack.

Very windy this morning.  Easy 3-4 ft waves with white caps, but the waves are at my stern, so it isn't too bad riding out.  About halfway to K Tower, (I have learned), I turn the boat around and face the bow into the wind.  Big waves, and lots of wind hitting me in the face.  Decision time.  Do I chicken out?  I'm thinking......  Have I mentioned to anyone that I need a bigger boat?  :-)   Halfway to K Tower, kind of like a big hand in poker, I feel like I am pot-committed.  I really want to make it to the tower, so I make the decision to keep going.  Hopefully, we stay safe.  I do know that Sunday (tomorrow) calls for lesser winds, so I factor that in to my decision.  My calculated guess is that winds are going to subside, not increase, throughout the day.

We're at K Tower.  We rig up and put the live pinfish on.  2-3 minutes later.  WHAM!  Something HUGE hits it.  OMG!  Jim fights it for a while, Sam gaffs it perfectly and Jim pulls this monster King in: 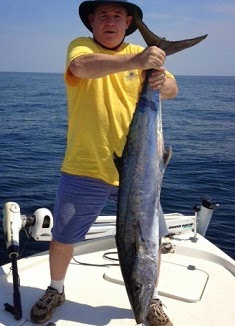 Gene Griffin: You HAD the biggest fish on my boat, but sorry, you have officially lost that title.﻿  This, by far, is the biggest damn fish EVER on Geeks 1.  The ruler on my boat doesn't go past 5 ft.  Unbelievably nice fish Jim - way to go.  Not only do I need a bigger boat, I definitely need a bigger cooler.  This fish doesn't even come close to fitting in it.  We have to break his tail to get him in.

Okay Sam, you are a guest, so the next one is yours.  We put another pinfish on.  2-3 minutes later - WHAM!  Jim gets another hit.  He fights it for a little but, like a gentleman, hands the pole over to Sam.  Shortly after, the line breaks.  Sorry Sam, that was a bit unlucky.

A few minutes later, another pinfish - WHAM!  Jim gets another bit hit on his side, but like a gentleman, hands the pole over to Sam.  Line breaks.  Sorry Sam, that was a bit unlucky.

Jim catches another, (I have no idea what Jim is doing differently, but I do hear him whispering to the pinfish), and like a gentleman, hands the pole to Sam.  Line breaks.  Dammit.  I am using 80 pound monofilament line and 45 pound wire leaders.  Sam isn't doing anything wrong, but the wire leaders keep breaking.  This happens one more time.  4 HUGE fish lost.  I am irritated.

We discuss the problem.

We all agree that it isn't Sam who is unlucky but the problem lies with the pre-made 45 pound leaders, (with cheap gates) that just aren't strong enough for these huge fish.  That is our consensus:

Sam sits down on the bow, faces me, and decides to have a "snack".  Good for him.  He is a little tired from losing all those fish.  The first thing he pulls out:  A f*cking banana.  Oh no you didn't!  You did NOT bring a banana on my boat!  "What?"  he asks me.  I very calmly, but very seriously, inform him, "You can either throw that banana away NOW, or you can swim back from here".  He replies, "But I brought 4 bananas!".  I immediately do the math in my head.  How many HUGE fish have you lost in the last 30 minutes?  Let's count, oh yes, 4!!!!!!!

All the bananas, including the one he is eating, get thrown overboard. 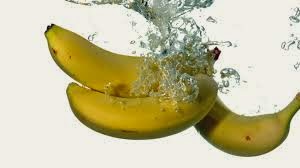 Sam starts catching Amber Jacks left and right, even jigging for them.  The boy is on fire.  He says its because he started rigging the tackle.  Uh huh, sure it is, Sam!  Meanwhile, there are no more bananas on my boat. 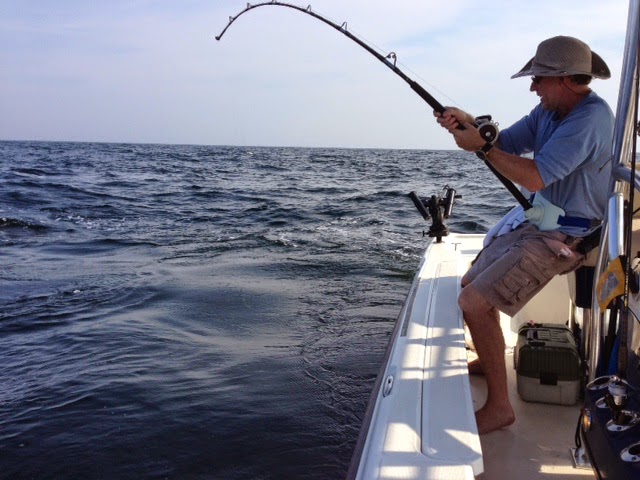 Jim did this for 45 minutes!  This is no amber jack.  For the last 45 minutes, as the Captain, I have used the boat to follow the fish for Jim - we have travelled well over a mile.  OMG!  What the heck is this thing?  Do they have whales at K Tower?  After 45 minutes, we still don't have a peek at it.  Jim, and I don't blame him, is exhausted.  I can't believe that, whatever this fish is, it hasn't broken the line.  It probably has to do with Sam's new custom-made leaders!  :-)

Finally, we see it.  Ironically, it surfaces right next to the bananas that we threw in the water.  Okay, not really, that just sounded good!  OMG!  Bull shark.  Biggest damn shark I have ever seen from my boat.  Definitely the biggest "fish", we have ever caught.  A couple of years ago, Ryan Brooks had a large bull shark on the line near K Tower.  He asked me what to do.  I said, "Not a damn thing cause you ain't catching a 150 pound, 8 ft bull shark from my little bay boat". So now I have to retract those words, because Jim Pittman has just done it.  Obviously, we aren't letting this monster in the boat.  Have you ever seen those idiots that do?  Yeah, me too.  Sharks get really pissed when they enter your boat.  They are not fans of oxygen and they are extremely strong.   Captain Hook doesn't need any more stitches in his body, so we bring it as close as we can to the boat, and VERY CAREFULLY cut the leader next to the hook.  Look, I have no beef against sharks.  They deserve to be out there.  They serve a purpose.  As recreational fishermen, our goal should be to protect all we can. I catch fish to eat them, not just to kill them.

We did our best to get some pictures of it in the water for you.  If I could play the JAWS audio here, I would:

OMG!  Now THAT is the biggest fish ever caught from Geeks 1.  Probably somewhere around 7-8 ft long and 150-200 pounds.  Just guessing, but trust me, I don't think I am exaggerating.  It looked  a LOT bigger next to the boat cutting the line with its huge mouth near my right hand.

Jim, bless his heart, needs a little "break" from fishing.  The shark needs a break from Jim.

Very busy at K Tower now with lots of boats; the wind has subsided considerably (I figured it would); so we decide to head to Oar Reef about 3 miles from K Tower.

But before we go, I decide to foul the prop with hundreds of feet of trolling line.  You know, just to make the day interesting.  Just when I think I am getting better at this Captaining thing, I do stupid stuff like this.  Keeps me humble, I suppose. It takes a while, but without going swimming, I'm able to cut it all off with my knife.  I've gotten better with that particular maneuver also.  Precariously hanging off the back of the engine while cutting line off the prop with a razor sharp knife is one of the reasons I don't drink alcohol out there.  Even being careful, bad things happen sooo quickly out there.  And this time, I didn't lose my military and police knife.  Not so in the past.

I REALLY want to learn how to use the "downrigger" that Major Mike Wood (Leon County Sheriff's Office) graciously gave me last year.  He actually gave me two of them.  These devices place the bait at whatever depth you want.  We still have 5-6 pinfish left,  and Sam and Jim agree to give it a try at Oar Reef.  OMG!  I don't think there was ever more than 5 minutes elapsed before an amberjack hit the bait at the depth we set it to.  A couple of years ago, we had tried to use the downrigger (with no success), but we were using artificial lures, and not live pinfish.   Downriggers rock.  We hammered the fish with it.  Thanks again Mike Wood.

Here is Sam with one of the keeper Ambers: 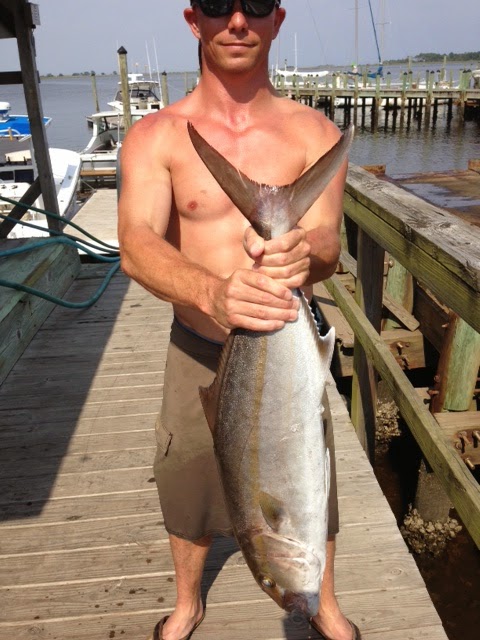 So we used 16 pinfish, which resulted in 16 large fish on the line.  We lost a few at the beginning, many were under 30", and we kept a few.  All in all, it was the MOST fish ever caught on Geeks 1 and definitely one of our more exciting days.  Sam, you are always welcome back - with oranges.  Fred - I owe you some beers at the bar.  Thanks again for the bait.

1. Don't fish offshore without live pinfish.
2. Don't use 45 pound pre-made leaders with crappy gates.  Make your own leaders with wire.
3. Always keep a sharp knife handy.
4. Downriggers are the "shit".
5. Thou shalt not bring bananas on my boat!

Thank you to all our soldiers.  God bless you all and Happy Memorial Day.  Thank you for making the USA the best country - ever.  If you are a veteran, you are always welcome on my boat.

Happy Birthday to Casey at Mad Anthony's. When she smiles, the world is a brighter place.