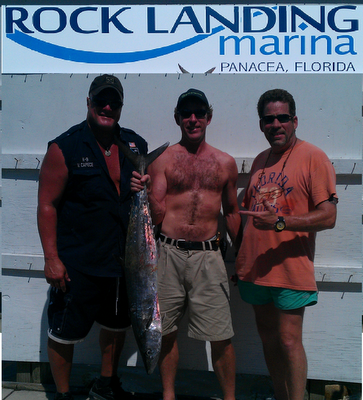 
As we leave the channel this morning, the waves are 6-8 feet.  In fact, I have been heading out since January, and these are the worst seas I have seen in the last five months.
On the boat today are Russell Paul and Vince Capish.  Vince works for TPD.  Let’s see, how do I describe Vince?  I've got it:  He is indescribable.  Let’s leave it at that.  The guy has a heart of gold and you won’t find a better person to count on if you are ever in trouble.  If I say anything more about him, he will want to kiss me, and since there would be no way I could stop him (he is twice my size), I will stop.  The fish is actually huge, but Vince makes him look small.  When we catch a big fish, I need to remember to only take pictures with little guys.


Because of the NE 20 MPH fricking wind, we don’t get more than a mile out of the channel before all three of us are soaked.  I am only cruising at about 10 MPH.
Before I completely blame it on the weatherman, let me say this:  “I think weather forecasts, in general, aren’t supposed to be for those of us who fish.  I think the weather forecast is for people who are sitting on their back porch reading the paper and drinking coffee.  I will also say this, the weather in the Gulf changes hour-by-hour so it really would be impossible to predict if from morning to afternoon.  Still, 6-8 foot waves and a 20 MPH NE wind is “quite” different than 5 MPH and 1-2 ft seas.  Okay, enough about the damn weather.


We are heading to Oar Reef this morning.  Oar Reef is just inside K Tower so I feel right at home.  I remember when I was scared to death to go "all the way" to K Tower.  Now, it seems like a close friend.  Russell loves to troll.  He isn’t a big bottom fisher.  And like Mike Wilson pointed out a few weeks ago, “Marc, let’s compare all the fish you have caught trolling, versus bottom fishing.  Any fish worth noting has always been trolling and not bottom fishing.”  Interesting perspective and entirely correct.  So we will troll.  Besides, it is really starting to get hot out here on the water and “always moving” is better than sitting still.  No longer do I need a jacket heading out in the morning.
We are trolling with a Green Stretch 25. I also have a new Blue Stretch 30 that Mike Wilson picked up at Bass Pro Shop last week.  Although the greens have been very dependable, I’m looking forward to trying something different.


It takes us awhile because of the waves, but we finally make it to Oar Reef in about an hour.  Everything on the boat is wet.  Vince is two Natural Lights in, but he still has 34 left, so we are good.
We only troll for a few minutes when we hear the sweet music of drag.  Something small.  A Spanish Mackerel.  The Stretch is at least half his size.  He must have had delusions of grandeur.  We throw him back.  Not interested in him.  We aren’t trolling long before something hits the rig in the rocket launcher right above my head.  I will take a moment to apologize to the deckhands here (especially to Vince since he is a guest), but I really didn’t think when I grabbed the rod.  Besides, the fish didn’t hit it that hard so I kind of figured he was another Spanish Mackerel.  And, in fact, as I start reeling, I can tell he is on the line, but he isn’t giving up much of a fight.  I get him close to the boat and then all hell breaks out.

He does NOT like the look of the boat.  He runs.  He runs hard and fast away.  Damn, this fish is much bigger than I thought.  Definitely not a Spanish Mackerel.  I already know he isn’t a shark because they don’t hit Stretches.  He is either a King or an Amberjack.  I get him close to the boat again, he runs again.  I am moving all around the boat by this time cause this son-of-a-bitch is going every direction and pulling my drag.  Russell and Vince are both staying out of my way and are getting the gig ready.  I will apologize to Vince here again.  I had no idea the fish was this big, otherwise I would have let Vince take the pole.  Still, as the Captain, I am having a fantastic time fighting this monster.  I know how Ryan feels now.


I get him close enough to the boat where Vince can gig him.  Damn Vince, I’ve never seen anybody gaff a fish that effectively.  Anytime you are on my boat, you are the official “gaffer”.


King Mackerel.  25 pounds.  Biggest fish on Geeks 1 up to this point.  Sorry Ryan, you had the biggest King, but this thing is bigger.  There is a new KING in town!  I suppose the contest between you and I has now officially begun. 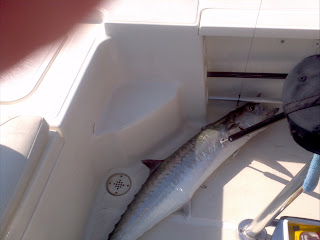 We place the King in the cooler.  Well, we put ¾ of him in the cooler.  He won’t fit.  He doesn't even fit into the above picture. That’s kind of funny.  We start trolling again.  Vince catches a large Jack Cravelle.  21 inches.  Is there a minimum size on Jack Cravelle?  We’re not sure, so we throw him back.  In hindsight, we should have kept him.  He was a pretty fish.  We troll towards K Tower.  When we get there we can see Cobia all around the tower.  Bait fish are also everywhere.  Another boat approaches and fishes with live bait. They catch nothing and move on quickly.  One thing I am learning about K Tower:  Everybody fishes it and the fish seem immune to both fake and live bait.  These large cobia swimming around us are not idiots.  So there are always a lot of fish at K Tower but I have yet to see anybody catch one.


Its getting late in the day so I head to shallower water around Ochlocknee Shoal.  We head to my waypoint called “Shark Shelf”.  Guess what we catch?  Yep, shark.  Damn, there are lot of sharks here.  Interesting that during the summer time everybody swims here.
We head in with, yes, you guessed it, one fish.  But damn, he is one large fish.  I am okay with that.  When we get back to the dock we compare notes with the 3 or 4 boats that went out that day.  Nobody caught much – not even Captain Vic.  That wind killed them.  Geeks 1 returned with the largest fish – by far.

Wait, let me repeat that, Geeks 1 returned with the largest fish!  Love it.  Russell says I am adding to my Captain Creds. 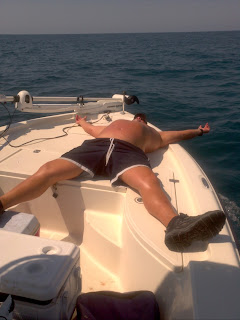 Vince, at his best! 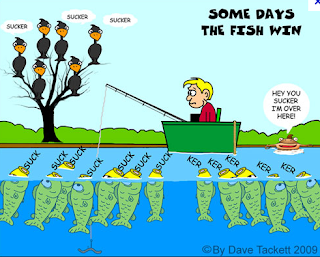 I have been dreaming about Bryon’s Reef all week.   After that Rock-the-Dock tournament, I really wanted another shot at that location.   I mean, I like to fish and everything, but the dreams were starting to drive me crazy.
We headed out at 7:15 a.m. in typical fashion.  The weatherman called for 1-2 foot seas, 5-10 MPH winds, 0% chance of rain.  I’m thinking, "There couldn’t be better fishing conditions".  Weatherman are always “spot on” right?

As we leave the channel we get hit with a rather brisk NE wind 10-15 MPH.  Bryon’s Reef is 40 miles from Rock Landing Channel.  I sure hope this wind dies down throughout the day.
Typically, I like to cruise at 30 MPH, but today, with this morning wind, I have to run the boat at 18-20 MPH.  It’s going to take us some time to get there.

An hour and a half later, we arrive at the reef.  I haven’t seen another boat out here all day.  Wait, I take that back.  I have seen exactly one boat and he is racing me to the exact location where I want to go.  Really?  He anchors right in front of me.  Bastard.  So, we start trolling.  Immediately, Russell catches a 25” Amberjack.  Great looking fish – not 30”, so not big enough to keep - but still a great looking fish.  We throw the trolling lines back in.  Almost immediately, something extremely large hits Mike’s rig.  This fish, by far, is the largest thing that has ever hit my trolling line.  The fish starts to run – fast and hard.  Then, he changes his mind as he probably doesn't like the way that hook feels in his mouth, and he heads straight back towards the boat - fast.  Mike is reeling as fast as he can.  This fish is big and fast.  The fish gets closer to the boat and just like that, poof, he is gone.  Dammit.  That boy was big.  Hey, who needs bottom fishing.  Let’s do it again.  We throw the trolling lines back out.


The waves are cresting at a solid 5 ft with white caps.  The wind is constant out here at 15-20 MPH.  You’re fricking kidding me!  There was supposed to be no wind today.  Weathermen!  They should just say, "We really have no idea what the weather will be today - now for sports".
We troll for another hour, but no more hits, so we decide to get on this guy’s butt and bottom fish.  As we were trolling around him, we noticed that they had several large fish on the line, but we have yet to see them get one in the boat.  Their lines keep breaking.  Oh, I feel terrible for those guys - yeah right!

Have I mentioned how difficult it is to anchor in 5 ft swells and 20 MPH wind?  We attempt it numerous times.   I know where the tugboats on the bottom are because the butthead in front of me is sitting on them, but trying to get my rock anchor to catch is proving quite difficult.  After numerous attempts, we kind of get the anchor to catch on something although we are not on the reef.  Mike is pretty tired from pulling 80ft of anchor rope so we give it a try.  After 20 minutes or so, I catch a small key west grunt, but other than that, nothing.  We keep bottom fishing for another hour, but – nothing – not even nibbles.


The day is marching forward and we have a LONG drive back.  I tell the boys to drop the trolling lines so we can troll back towards K Tower.  10 miles to K Tower.  We can’t go fast anyway because the waves are crashing over the bow.  We troll for an hour – nothing.  We are definitely running out of day now so we pull in the lines and head towards K Tower – a little faster.  The wind is punishing us.   Due to the wind direction, the waves are crashing over the starboard side.  Mike is soaked.  Thanks Mike – I’m pretty dry - please don't move.   We finally arrive at K Tower, but it is 2:30 p.m. now and we still have another hour to get in.  Nothing to do but keep going.  Since we only have one fish in the boat, I throw him back.  What’s the point.  Seagulls love us.
We arrive at the dock – oh, guess what, "Geeks 1: doesn’t have any fish in the boat – again.  No other boats around today, so big deal.

We are exhausted due to the waves and wind, but at least we are back safe.