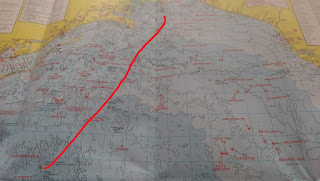 Here on Florida's Forgotten Coast, it's "Snapper Season".  Last year, snapper season was only open for nine days.  This year, a little longer, but not much: Two weeks - I think.

From Panacea, you have to go a LONG way to get to them.  Apparently, they hang out between V Tower and S Tower (See map).  Two far-away towers, btw, to which I have never been.  Except for bringing the boat back from Pensacola, I have never had the Century out that far.  From Apalachicola, S Tower is not that far, but that is an entirely different story from Panacea.  Bottom line:  S Tower is about 100 nautical miles round-trip from the Rock Landing Marina.  Whew!

It's Saturday morning.  The dock is rocking with lots of boats.  There is definitely excitement on the dock. ALL boats 24 ft or bigger are icing, fueling, preparing and chatting. I love this part!  I absolutely love being on the dock with all the other boats getting ready to go.  Sure, there is competition in the air - that is part of it - but there is also camaraderie.

The weather forecast is sunny and calls for 0-1 foot waves.  I'll believe the wave part when I see it. Every time we have been out this season, it's been 4-6 foot waves.  The wind is getting old.

Charmaine (Videographer) can't make it, so on the boat today is just the four of us:  Marc, Cameron, Sam and SJ (Sam Jr).

One hour and 45 minutes later, we arrive at S Tower.  Holy Crap - this tower is a long way from Panacea. But we're not alone - there are boats everywhere around us.

We start fishing and we catch some small vermilion snappers.  Not exactly what I drove 50 miles for. I start thinking to myself, "You're an idiot, why did you come all the way out here?"  Then, it happens.  SJ does it.  But it starts quite quietly.

Nobody is really paying any attention to him. He states rather calmly from the other side of the boat, "I think I got one".  I look over at him.  The first thing I notice is that his feet are actually leaving the deck.  The fish is so heavy that he is being lifted off the boat.  For some odd reason, I find this site rather humorous. (He does have a PFD on).    While chuckling, I do manage to say to his Dad, "Hey dude, I think he might need your help." 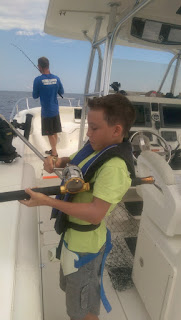 Although Dad assists, he lets SJ do most of the work. The pole stays under SJ's arm the entire time. You gotta earn the right to say you caught a fish that big.  After 4-5 minutes, the fish makes it in the boat.  15 pound snapper!  Wow, an amazing fish, SJ!

Wanna watch him catch it?

Here he is right after he caught it: 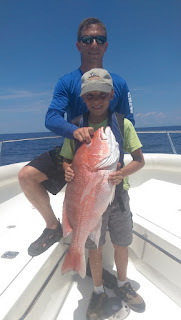 Now you see why his feet were coming off the deck?  The fish is almost as big as he is.

Then, his Dad catches a similar one.  For the record (and we weighed both of them), SJ's is bigger!  "Who's your daddy!": 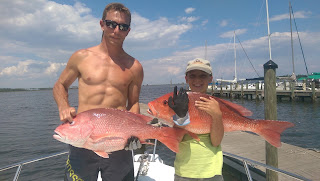 I don't think the kid stop smiling the rest of the day.  Which brings me to my favorite quote of the day.  SJ asks how many snapper we can catch, and I reply, "We can catch two snapper per person", and he replies, "Actually Captain, we can catch as many as we want, but we can only keep two".

Love this kid!  I name the waypoint where he caught it:  "S Tower - SJ".  Now he has his own spot deep in the Gulf of Mexico.﻿ 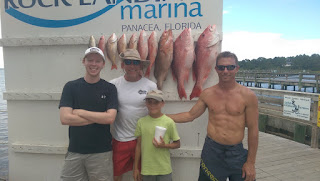 True, we didn't fill up the board with fish - I'm still learning how to do things out there - and we did go a long, long way, but I'm certain that a 10 year old kid won't forget a snapper that size for many, many years!

Fishing takes practice.  I still have a LOT to learn out there about bottom fishing - okay fishing in general.  Believe it or not, it is more difficult than you might think - especially anchoring EXACTLY on a waypoint in 100 ft of water.  Damn, that is difficult.  I look forward to telling you more about it on my fishing show!

And kudos to my son, Cameron.  He continues to improve out there on the water. He is pretty humble about being helpful, but he has become extremely handy on the boat.  I couldn't have done it without him. I couldn't ask for a better father/son day. (Well, except for maybe the KC Chiefs game :-).  Cameron heads off to college soon.  He may not be a little kid anymore, but quality time with him now is time I won't forget for many, many years.  I am honored to be his Dad.  I will truly miss him, his energy, and his personality, when he leaves for UNF this fall.

I'm exhausted, but believe it or not, I will be back at S Tower on Monday as I will be taking WCTV Channel 6 News out on the boat, so I have another post to write in a few days.  I'll be back soon!

Just for fun, here are a few closing pictures: 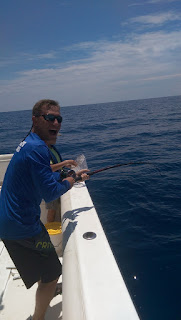 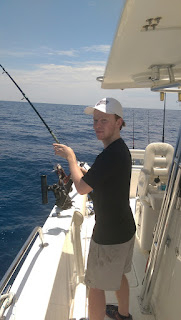 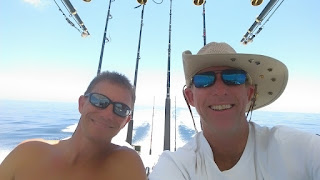 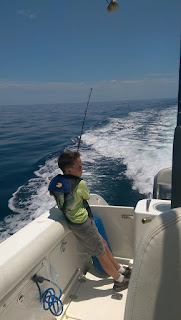 Oh, and for the three of you who DO read my blog, we are making progress with the actual Capt'n Hook website.  The site has a LONG way to go to be ready for prime-time (we are just getting started), but if you would like a "sneak peak" at it, here it is:

As always, thank you for taking the time to7 read this post.