Admittedly, living in Florida rocks, especially in regards to being able to do outdoor things during the winter months!  I just saw the news where it is snowing like hell in NY and the Northeast. Well, it is warm and sunny here in Florida, folks.  If you are reading this from some freezing state in the North and you are jealous, well, you should be.

I will admit though, that you have to be a little careful fishing offshore in November.  The weather can change on you rather quickly out there as it did on us the other day.  A little dicey getting from V Tower (40 miles offshore) back to shore.  If I had had a smaller boat, it would have been downright scary and dangerous.

I'm not sure how to setup this particular post because for the last two weeks, I have fished twice  - both weekends in a row, and both trips were actually somewhat similar, although the common denominator was "Joe": 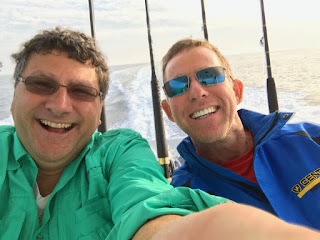 So I will join both trips into this single post.  Here goes.

The 2nd week in November, Joe brought his son "Joe".  Very original name there.  Since I can't be yelling at two people on my boat named Joe, I labeled the younger one, "JJ".  I'll let you rocket scientists figure out that one. JJ is 15 and he brought his 15-year old girlfriend of two whole weeks: Morgan: 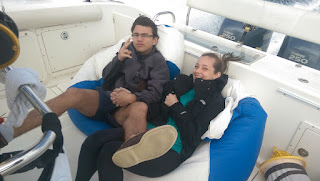 Joe trying to look cool - a real effort for him, btw.  Looks like Morgan is having fun even with having to be stuck with him.

Even though the weather is nice, being a rather cautious Captain, I decided to head out to Oar Reef. This reef is only about 17 miles offshore and it resides squarely in my comfort zone.  Besides, there is absolutely nothing (except Grouper) open.  And I, admittedly, suck at catching grouper - although I THINK I am improving.

After 30 quick minutes (hauling butt at 40 knots), we arrive at Oar Reef and deploy the trolling rigs. The stretch 30's barely have time to get wet - estimated 20 seconds later - we get a hit.  Really? Okay, that is cool.  Here is Joe fighting whatever it is.  It isn't easy to get in, so it must be something of decent size: 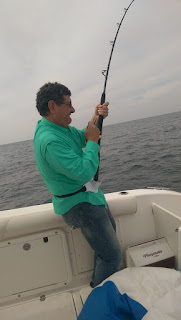 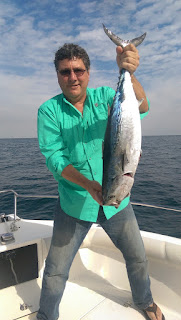 Nickname, "little tunny".  They kind of look like tuna - but unfortunately, they don't taste like them. Well, they are very pretty, and they put up a great fight, but you definitely can't eat them because they are soooo bloody.  Cause trust me, I/we have tried to eat them. Nasty! Still, fighting a big fish for several minutes versus sitting on your duff listening to my crappy music is always preferred by the crew.  We keep the Bonita for bait (they make excellent bait) and deploy the trolling rigs again.  AJ would have been better, but even if we had caught one of them, we would have to throw it back - cause they are, of course, "Closed." 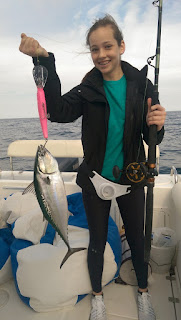 One thing I will say about Morgan:  The little girl knows how to fish and she knows her way around a boat.  We used one of the larger bonitas for bait and several times I turned around and saw her carving into that big dead, bloody fish, grabbing a large chunk of dead, fleshy meat, and baiting her own hook.  Rarely do I see that from a young lady.  I think she told me that her grandfather taught her how to fish.  Way to go GrandDad!  Morgan - if you ever read this post, you are ALWAYS welcome to come fishing with Captn Hook again - with or without JJ!  I was impressed!  Send me an email.

We grow a little tired of catching bonita, and decide to anchor on the reef to see what is down there. A few minutes later, we catch a red snapper! 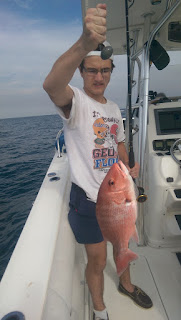 Hmmm.  That's a little unusual.  I have never seen/caught a Snapper East of S Tower - which is 50 miles to the West of Panacea.  What are Snapper doing this far East?  And only 17 miles offshore in only 45 ft of water?  Interesting.

We throw the first two back because like I said, the species is "Closed".  Joe asks me, "Hey, how big would they have to be if we could keep them?"  I had picked up a sheet at Crum's that morning and as I was looking at it, I noticed that there was a special paragraph under the Red Snapper category that read, "Red Snapper open today".  I'm assuming because of Veteran's Day weekend.  Awesome!  It goes without saying that we keep the rest of the snapper that we catch. 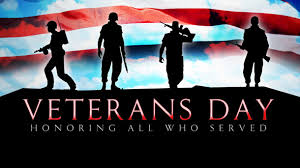 Allow me to take this moment to sincerely thank ALL of our Veterans for your contribution to our country. And in a smaller way, allow me to say "Thank You" for giving us the freedom to actually KEEP some of the red snapper we caught.  Especially to you boys who are serving overseas.  We can't thank you enough here in the US.  Here are a few of the snapper we caught: 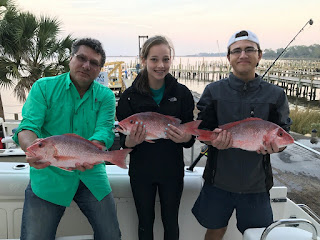 And trust me - unlike Bonita, Red Snapper are extremely tasty on the dinner table!

All in all, it was a great day.  The weather was beautiful, the seas were light, we all made it back safely, and the teenagers had a good time.  It's all good!

Yes, I know - all the fish species are still closed!  I know, I know!  But I want to go fishing anyway because it is yet ANOTHER beautiful weekend.  When the high is 80 degrees on a Saturday and the winds are non-existent in November, well, you GOTTA go fishing!  So I invite lots of folks.  At first, it appears that only Jim and I are headed out.  But, as is often the case, more people sign up at the last minute.

So on the boat today is "Joe", of course - our common denominator.  But we also have:  Jim, Mike, George, and Joe's 21 year-old daughter - Eve.  If you are new to this blog, I don't use last names.

There is a cold-front that is supposed to be arriving around 3 p.m. so we need to be mindful of increasing winds in the afternoon.  I am told by a few people at the marina that there is no way that I can fish offshore today (small craft advisory). But as I have learned, you don't know the blow until you go.  So we go.

Because it is a comfortable reef for me, we head out to Oar Reef and troll.  Once again, there are Bonita there.  We catch a couple.  Sorry, I didn't take any pictures of them this time.  Besides, you know what they look like already from above.  It only took a few minutes for us to catch a couple of them.  I just want them for bait.

We drop down on Oar Reef.  Sure enough, the Snapper are still there.  Unfortunately, THIS time, they are definitely closed.  So I know we can't keep them.  It sure is tempting though.  Man, I hate throwing these tasty guys back: 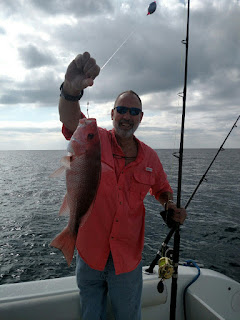 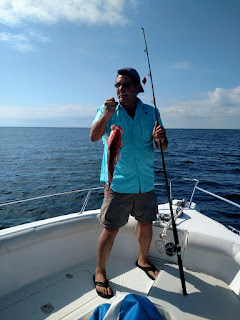 After Oar Reef, I kept heading into deeper and deeper waters because it is still sunny and calm.  At one point, we were actually 40 miles offshore right next to V Tower.  We caught Red Snapper all day. In one location near V Tower, which is about 40 miles offshore, we easily caught 25-30 large Red Snapper. These guys are EVERYWHERE out there!  "Endangered" - my butt.  I think it is safe to say the species has re-bounded.

But the "funnest" part of the day (I know that isn't really a word, but it upsets my wife when I use it) was fishing the Towers.  We trolled past K Tower and this bad boy gave Jim quite the ride for awhile. In fact, Jim had to take a little fishing "break" after getting this guy in the boat: 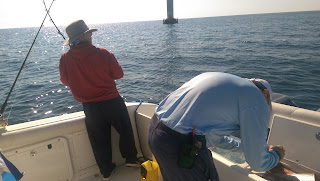 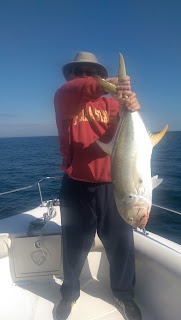 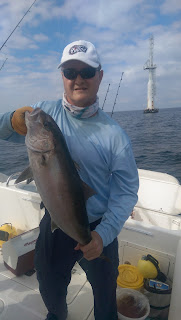 Mike threw a pinfish right next to the tower and actually got the pleasure of watching this AJ hit it. That is always fun when you get to watch the strike. Nice fish gentleman.  Each fish was about 20 pounds apiece.  Jim's was a Jack Crevalle (while Mike's was a Greater AmberJack).  That is the largest Jack Crevalle I have ever seen, btw Jim.  Jim has a way of catching unusual fish on my boat.

Allow me to finish this post with what most all my male readers want to see - a girl in a bikini. Joe brought his daughter on the boat.  She was pretty and she loves to fish.  I would be lying if I didn't get distracted at the wheel a few times.  :-) 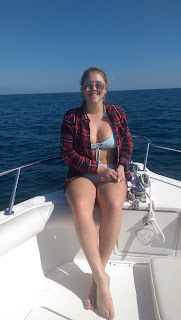 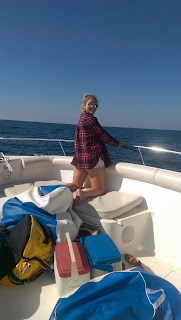 "Hey Captain, are we going the right direction?"  "Oops, sorry guys, I kinda got distracted." :-)

Thanks Eve.  You are also ALWAYS welcome to fish with Capt'n Hook!  Including Eve's pictures should ensure that my blog readership increases by another thousand. :-).  You men are VERY predictable.

Yeah, not going to happen.  Thanksgiving is this week, Cameron is in town from UNF, the FSU / UF game is Saturday evening and I turn another year older on Saturday (I turn 37 - no really).  So - no more fishing this month.


Bottom Line:  We have had a great time fishing in November, even if we couldn't keep any of the damn fish.  Thanks again to everyone for fishing with me and thanks to my three readers for reading this entire post.  I doubt I/we will be fishing much throughout Dec / Jan / Feb, so it may be some time before I write again.  Stay safe during the winter and I/we will be back in the Spring with more adventures.

Oh, and look for something a little unusual from me in December.