Wife is a blog hacker.

Hey Capt’n Hook:
This is your wife.....
It took us forever to get to the coast.  The girls needed matching outfits, special hair stuff, only certain foods for lunch and, of course, a Starbucks stop. It was almost lunch before we actually got on the boat.

The boat is huge! It is so much bigger than I thought it would be. I had just stepped on when Marc – sorry - “Captain Hook” told me what to grab in case of emergency; which buttons to push; which station to use for the emergency radio; the first aid kit; and which bags to inflate in case he was incapacitated. The first thing he showed me was all the emergency rules. Remember, it's just me and two twelve-year old girls.  The emergency instructions are taped to the dash:
We get a few miles out, "Steer the boat" he says. You gotta be kidding me. Thankfully, Delaney says she can do it.
He then tries to show me how to fix “inriggers” or “outriggers” or whatever all that nonsense is on the back of the boat.

Since I won't drive the boat I, apparently, have to do all the bits with the poles. I don't really fish either, btw. He taught me early in our marriage how to put a shrimp on a hook and cast my little line on my little pole into the water. I never progressed from there and -I'm okay with that! He's telling me to listen for the “zing” of the line so then I can set it, pull it in, pay out the line etc. "And you can help the girls do theirs too," he assures me. You gotta be kidding me.

About this time Delaney’s friend get seasick and is puking over the side. I view this as a sign from God that we should go back. But the little girl rallies and the Captain is determined we should continue to troll and catch something. Little does he know I'm frantically bargaining with God not to catch anything and nor for the Captain to become incapacitated. Thankfully, she pukes again and he makes the decision to go in. Whew, after three hours of getting out to the coast and 30 minutes of actually fishing - we return safely to the dock.

But NOOOO - the drama doesn't end there. Marc disappears somewhere and the “water police” hook onto the boat (at the dock) and start asking all these questions. I keep telling them, "I know nothing about anything on this boat" but they refuse to leave. I figure that sounds suspicious as heck and I’m pretty sure they are going to impound this new boat.
So my lesson of the day was.....Never step on the boat again unless there are several other people already on it (i.e. Gene, Sam, Mike, Ryan) who know way more about boats than I do. My next boat ride - I will be sitting in the co-pilots seat with a good book.

I just read your “smiling” post; I know your blog login credentials, so I feel compelled to give my view/perspective to your followers.  Here goes: 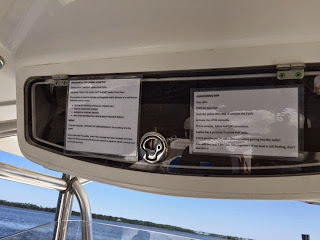 I kinda wanted to step back out. You have to understand, I know NOTHING about boats – nor about anything electronic. I can't even turn on our TV at home – no really, I can’t. The electronics console looks like an airplane dashboard: 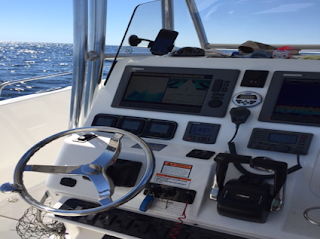 
You gotta be kidding me! Who would have guessed they were just there to harass Capt’n Hook because they knew him!
The next "fish I catch" will be at Mad Anthony's restaurant, preferably grilled, and with a chilled glass of wine. 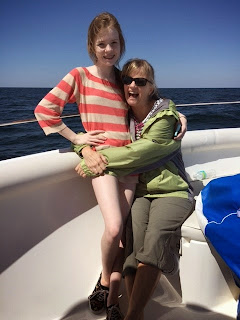 Dude, Why aren't you fishing? 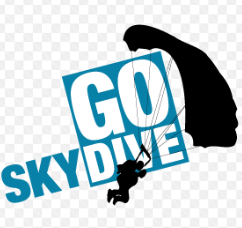 Blog posts are usually comprised of "words", but in this post, these simple "videos" easily explain why I am/we are NOT fishing today.

Here they are.  Enjoy!


Thanks for "watching".  Come fish (or skydive) with Capt'n Hook soon.

Happy Memorial Day and THANK YOU to all our veterans. (That includes you Russell) 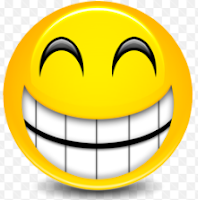 I have owned the boat for eight months now and Terri (who is a fan of boats) has not yet been out on it.  Ooops.

It is past time to take the wife on a fishing trip.

And as long as I'm taking the wife, I might as well take the daughter. (Delaney)

And as long as I'm taking the daughter, I might as well take the daughter's friend (Lexi).

Still windy here.  Have I mentioned that I am not a fan of wind?  Conditions are rough, but it is sunny.

Lexi tells us that she has been out on boats before so I decide to take them all about 15 miles offshore. (What I consider inshore). For the first part of the trip, they decide to hang out near the bow because they are enjoying the large waves and the crashing of the bow up and down.

They are really laughing, smiling and enjoying themselves.

That doesn't last long as Lexi falls, bangs/cuts her knee and smacks her chin against the metal railing.  She is a trooper though after a little first aid on her knee:

She is back to smiling. 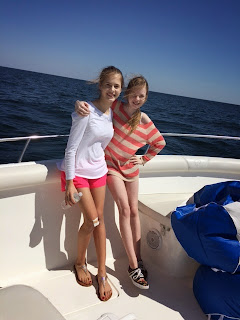 I had actually intended to take the girls to K Tower, but it simply too rough for that.  After 20-25 minutes, we make it out to the area I want to fish (Camp Reef).  Thanks again Camp.  I show them how to drop the trolling rigs into the water; how to pay out the line; how to set the drag; how to test the drag tension; how to turn on the clicker.  Glazed looks ensue.  :-)

We are fishing a few minutes when Lexi gets that "odd look" on her little cute, teenage face.  I know that look.  It is easily recognizable on the water.  She goes from brown (tan) to green quickly.  Seconds later, yep, she is chumming for fish from her esophagus. Fortunately, I have never been seasick, but I have seen LOTS of people who have.  It really doesn't look like fun.  We give Lexi some water; she says she is feeling better and she is smiling again.

Hmm.  Rarely have I ever known anyone to recover from seasickness until their feet hit the dock.  But maybe, just maybe, Lexi will be different.  Conditions are still rough... 4-5 ft waves.

We fish for 5-10 minutes.  Nothing biting.  Lexi decides to chum for fish again.  Bless her heart. She is only "kind of" smiling now.

Although we have only been fishing for twenty minutes.  We decide to head back.  It isn't a difficult decision by any means.  Anything else would just be cruel.

On the ride back, Lexi decides to donate to the Gulf of Mexico just a little more of herself.  She is no longer smiling: 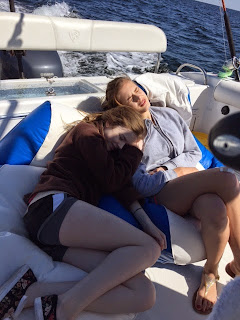 Delaney and Terri still are.  They have never been seasick: 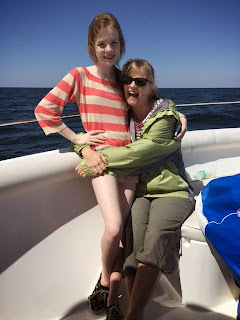 I'm just throwing a picture of myself in here from our trip, cause I can: 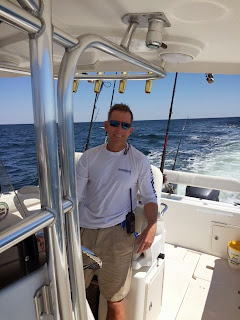 We return safely to the dock and after only 5-10 minutes with her feet on dry land, Lexi is smiling again, so the girls decide to have a little picnic on the dock next to the boat.

I am returning from the marina store and walking back down the dock when I see they have latched on to my boat sitting at the dock.  One of the dock workers asks me, "Marc, what is up with you and FWC?  They follow you everywhere."

My reply, "They show me attention when I shoot at them".

As I walk up, I see that it is Jason Marlow.  He is an FWC officer who I went to sea school with.  We got our Captain's licenses at the same time.  Jason is a really nice guy (although if you tell him I said that, I will deny it).  Trivia:  Jason knows more about sea life than anybody.  He is obviously enjoying my wife's discomfort.  (I like him even more).

Good to see you Jason (on left).  Let's see if you can catch me on the water next time!  Docks don't count.  I know, it probably isn't wise to challenge the FWC to catch me.  I never said I was the smartest Captain.  Oh yeah, what is the Coast Guard navigation rule again?  "Always speed towards the red and yellow lights and speed away from the blue lights".  Yes, I'm certain that is the Inland and International rule that we studied in sea school.  :-).  In this picture, I'm actually NOT in front of them, I'm just bigger and more muscular. 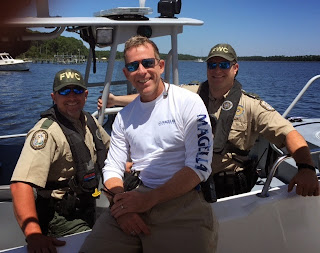 At Mad Anthony's, it is only fitting that I buy all of us virgin strawberry daiquiris.  Those things are awesome!  Although Lexi has fully recovered, I'm pretty certain it will be a long time before she fishes with Capt'n Hook again.  You're always welcome though Lexi. 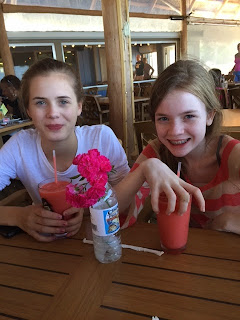 I'm pretty sure I still owe my wife a fishing trip.

Great job on the photos, Terri!

I'll be back very soon everyone.  Thanks for reading.  Come fishing with me soon.