How Many Do You Need?

This last weekend in April was the "Rock-the-Dock" tournament in Panacea, Florida.

There is a significant weather front coming through Friday night, but the weekend is supposed to be beautiful.  I start prepping the boat as it starts to drizzle. 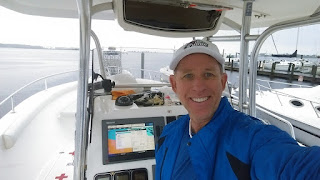 By the time Mike arrives Friday evening, it is raining pretty hard.  Rain is always pleasant with beer: 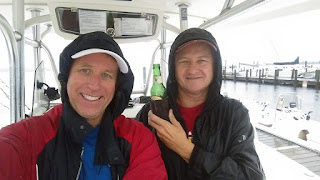 I thought long and hard about entering the fishing tournament.  I mean, there is a LOT of fanfare associated with it.  You get a chance to walk across the stage while some guy yells out your name on a megaphone; sometimes the news media is there; and the size of your fish is called out to whomever is listening.  If you're lucky, you get to say your name.   You can take pictures on the stage, whatever. Its only a few hundred dollars to enter.  You could even WIN a few hundred.

Someone saw me at the dock and said, "Hey Capt'n Hook, if you aren't in the tournament, then why are you even here?"
I replied (not sarcastically), "Well, last time I checked, this was still the marina where my boat is stored and I still have the right to fish with my friends on the weekend, right?"
They shrugged and walked away.

It's Saturday morning. Partly cloudy.  On the boat today are:  Sam, SJ, Gene, Jackson, Mike, Jim and Me.

The forecast is calling for almost perfect weather for the entire weekend:  Sunny, no chance of rain, and very little wind.  From a fishing/boating perspective, it is ideal.  So after spending a quality night together in the Shack (NOT drinking beer by the fire, btw), we all head out Saturday morning.  Our goal is "S" Tower. S Tower is a long way from Panacea.  About 50 nautical miles (one way).  At 40 knots, it takes about 1 hour and 45 minutes to get there, but we are excited to fish hard this weekend.

We arrive without getting too beat up from the wind.  All in all, not too bad of a run.  My back is only a little sore.  We start fishing; Gene in his new designer fishing clothes; smelling like cologne and fresh cut flowers: 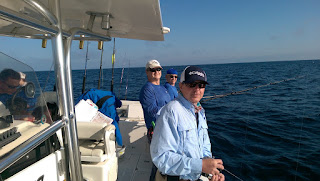 Okay, you get the picture.  They are catching a LOT of f**king AmberJack - RIGHT NEXT TO US!. What do we catch?  Not a damn thing.  They are using some type of weird jig and what we think are live pinfish. So we start using the weirdest jigs we have on board and our own live pinfish.  Still nothing.  Come on, really?  AmberJack typically love live pinfish!

We have two boys on our boat. One of the boys (not saying which one) turns to me and says for the umpteenth time, "Look Mr. Marc, that boat is doubled up AGAIN!".  I turn to him and say, "Even though I am not your father, if you say that to me again, I am going to whoop your ass".  He quietly returns to fishing.....

He knows I am kidding, but it is safe to say that sometimes, I can get a little irritated.  And believe it or not, I have a very minor competitive streak.  I do find fishing very relaxing, but I find a LOT of things, in general, irritating. Like not catching fish when the boat next to me is killing it.

Anyway, after about an hour of watching them catch 15-20 huge, frickin AmberJack, I decide, for some odd reason, to leave this particular spot.  We head to a new waypoint that is far from the Contender but still near the tower.  We start catching lots of Lane and Vermilion Snapper (and large Red Snapper I might add). We can't keep the large red snapper (of course), but we do keep the other species.  The boys start having fun again catching fish.  ALL snapper species are excellent to eat.  SJ even catches a TriggerFish, which is rather an unusual fish to catch.  We can't keep him either (of course): 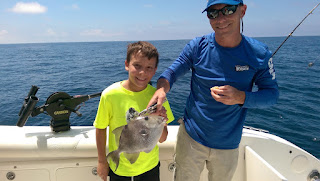 And I must say, SJ was on "fire" all day.  That boy had the magic fishing touch!  Sorry Jackson, but he got you on this trip.

I'm always happy when a father and son get to spend quality time together on my boat: 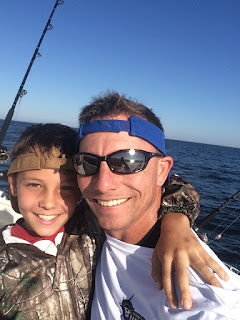 Hey Jim - how many times did we catch the engines and wrap fishing line around them -- Jim?  Well, I'm not sure, but it was definitely more than once. I'm not saying Jim isn't as limber as Sam, but thank you Sam, for stepping out and being good crew.  Since we do it on almost every trip, we are becoming experts and removing line from engine propellers. 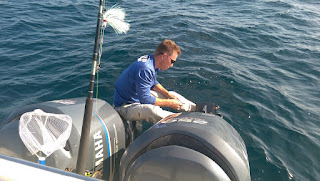 Nice job, Mike on the red Snapper.  Sorry, we can't keep that species either (of course): 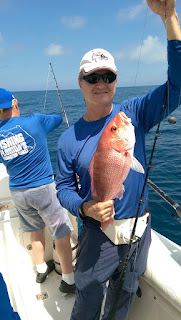 Nice job also Mike on the red grouper.  Sorry, we can't keep him either (of course) 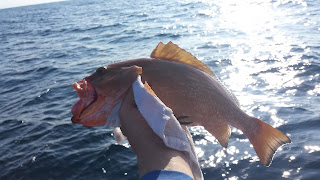 We eventually head back to S Tower looking, again, for large AmberJack, but it just isn't meant to be. The Contender is still catching them though.  We head home for our long drive.

The nice thing about the Crack Shack is that it is soooo close to the marina - within walking distance. That night, I fried up and broiled the snapper with fresh lemon and mango.  We ate fresh fish next to the fire and talked about the day; my irritation greatly diminished by now.  Funny how beer has that effect.

Here is SJ enjoying a "ring and hook" game on the back porch: Oh, and speaking of the Shack,  I recently had some trees removed and some rock delivered.  Just for kicks, here is a reminder of how it looked when we bought it, and what it looks like now: 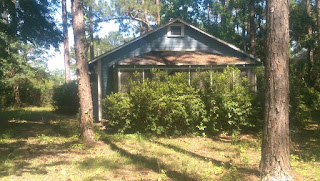 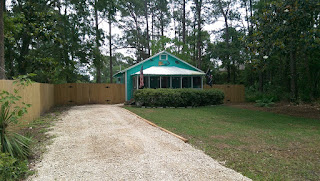 But I digress..  This is a fishing blog, not HGTV.

We all went to bed relatively early cause we had another LONG day of fishing ahead of us.

I often wonder why I love fishing so much.  Being fifty miles offshore is not for everyone.  It is challenging and physically exhausting.  Like I have said before though, I think it is the mystery of it all.  I do love nature and all that beautiful water.  I simply love it out here; irritated or not.  Besides, it is impossible to beat the camaraderie: 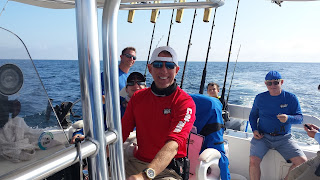 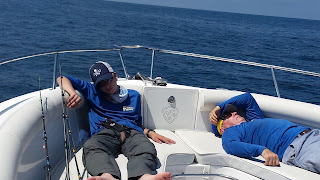 Jackson, bless his heart, felt pretty miserable on the boat as the day progressed, but he wasn't about to tell his Dad.  Jim, on the other hand feels just fine, he is just old and must nap often.

Gene makes the right call and takes Jackson to the doctor instead of back out on the water.  So we lose two fishermen on Sunday.  Don't worry Jackson, you didn't miss much. Let me explain:

Beautiful day on Sunday, I have to admit. Today, we are headed to "O" Tower.  It is about 30 miles offshore, so definitely not as far as "S" Tower.  We arrive and start fishing for AmberJack.  Within just a few minutes, this happens: 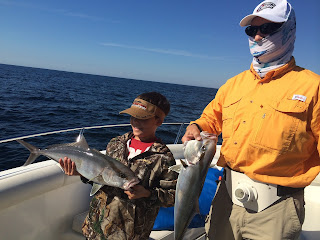 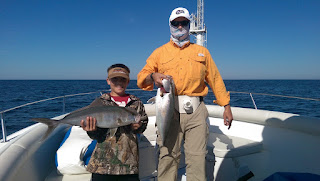 Mike and SJ get doubled-up on AmberJack.  "Cool", we are thinking.   Would have been even cooler if some kid on another boat nearby would have said, "Look Dad, that Capt'n Hook boat is doubled-up!  They must really know what they are doing!" :-)

We leave Federal waters and head to State Waters.  Okay, we do manage to catch a King, but it isn't really that large, and honestly, we kind of catch him by mistake. We KEEP him, although there is probably some regulation, that we are 4.8 miles from a navigation buoy, 2.4 miles from some unmarked nuclear restricted area, and .739 hours from a full moon equinox meaning that the King, based upon triangulation, is illegal based upon Sierra Club regulations.

Here is Mike (sometime during the day) looking nice in his designer fishing ensemble.  (For the record, he didn't look quite as fashionable, or smell as good as Gene on Friday): 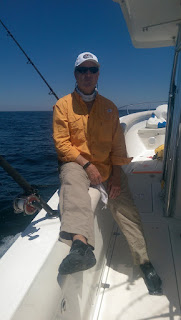 We may not catch a lot of fish, but we look DAMN good not doing it.  We are, without a doubt, the best-dressed geeks offshore.

Anyway, we put five lines out and troll for the next two hours in State Waters seeking gag grouper. Nothing. We head back to "O" Tower (Federal Waters) and try, one last time, to find large AmberJack.  Nothing.

Mike does hook into something very big (probably AmberJack or Cobia) with a jig right next to the tower, but as luck would have it, the jig hook bends.  Typical for this weekend.  Mike's turn to go get irritated. :-) 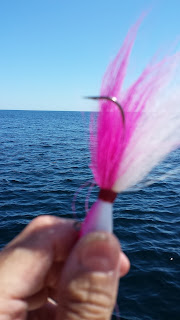 So, all day goes by and we return with one (1) fish!  Sad, just sad.  So like I said Jackson.  You didn't miss much.  Besides, you know we will head out again soon.  I hope you are feeling better my friend.

The only thing that made me feel slightly better is that I spoke, upon our return, with numerous people on the dock Sunday afternoon, and nobody, and I mean nobody who came in to Rock Landing Marina, caught ANYTHING on Sunday.  Everyone agreed that it was one of the worst fishing days they have experienced in a long time.... Meanwhile, I hear on the megaphone on the stage that the biggest grouper caught was 20 pounds.  20 pounds, really!!!  In State Waters!!  Near Panacea? Really?   You know how big that is?  In State Waters?  When nobody caught anything?  Really?   Here is an example: 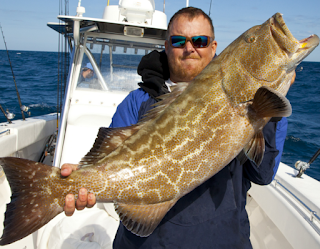 And I think the largest King was like 200 pounds.  Well, not really, but whatever.... Shucks, I am sooooo upset that we didn't enter this "local" tournament.

Monday night, Terri, Delaney and I ate the $750.00 (based on actual cost) King for dinner.  I savored every bite.  I believe in eating what I catch - which isn't difficult all things considered.  It was very tasty, btw: 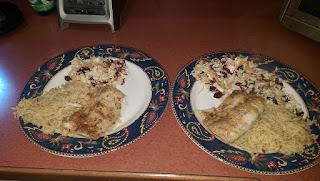 Oh, I know you are asking yourself, what's up with this post's title?  "How many do you need?" Well, okay, you probably aren't asking yourself that cause you just don't care.  But I'll tell you anyway:

Recently, someone sold me a few rigs so I was able to add to my "limited" offshore rig collection. Fishermen often wonder if they have enough rigs to get the job done.  Well, apparently, I do not.  I need more!  I'm sure you (and my wife) will agree that if I had had more rigs, surely we would have caught more fish: 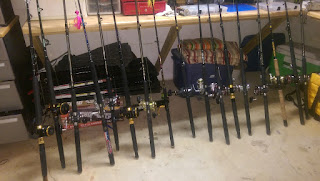 In closing, let me say (type) this:  I realize that I am truly blessed to get an opportunity to spend an entire weekend on a boat, fishing offshore with my close friends.  I thank God for giving us the opportunity to return, once again, safely.  So even though I get irritated easily (my nature), know that I never take fishing, or the fishing experience, for granted.  I am truly grateful for the depth of enjoyment that it gives me.

Thank you everyone for reading and thank you guys for fishing with me.