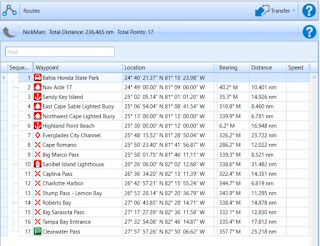 This post is part of a multi-part series.  If you start reading now, you are hereby required to read ALL the upcoming posts/chapters in the next few days. There was simply too much content to put into a single post. All three of you (my readers) would waste your entire day reading if I put everything in one post. So, I have separated them (for the most part) by day labeling them as Chapters.

This first Chapter is pretty quick so if you get your cup of coffee (or wine), don't get too comfortable: 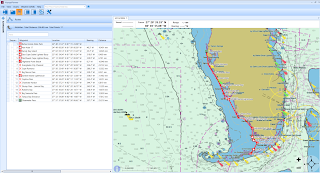 Waypoints on the left.
Estimated float plan is the red line up the West Coast of Florida. 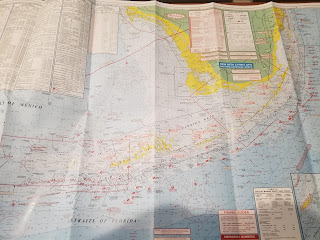 My best friend Nick has always wanted to sail around the world. Me, not so much. I love being on the water, but I don't think (okay, I know I don't) have the patience to be a sailor. I have known Nick since I was 13 years old; I met him at a 7-Eleven in Clearwater while I was playing "Asteroids". To say that we have been friends for a "long" time is definitely an understatement. We are quite different men, but the friendship has endured for 40 years. Nick has always been a bad influence on me, btw.  :-)

As a pre-cursor to his sail-around-the-world "bucket-list" endeavor, he got this "amazing?/crazy?" idea that it would be "cool" to sail his little 1970's 22' sailboat from Key West to Clearwater. That is about 300 nautical miles, in case you are wondering. Another way to put that - it is a long f**cking (fricking) way in a little sailboat. His brother-in-law, Don lives near Key West (Bahia Honda State Park), so that, Nick assured me, would give us an excelling starting point. Sure Nick, sounds reasonable.

When asked to accompany him, I, of course, said, "Count me in, Nick". YOLO, and all that. Nick is more adventurous than me, so I gotta do what I can to keep up with him. Since I know how to navigate (thanks Sea School), I spend a few weeks creating reachable waypoints, calculating distances and headings, analyzing bays, rivers and harbors up the West Coast, using my software to organize the journey and entering those waypoints into my little hand-held GPS.  (Our primary form of electronic navigation).  I put all this into a folder.

Do I enjoy this? - you're darn right I do. I would quit my job tomorrow if I could navigate every day. 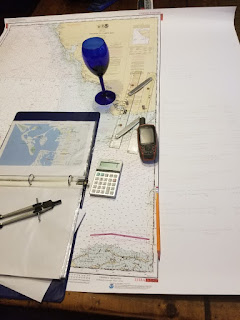 Red wine ensures that my dining-room calculations are correct. I calculate a "minimum" of 8 legs - if everything goes well. That means a minimum of 8 days on a tiny, cramped sailboat in 100+ degree heat. What could go wrong? At this point in time, I'm still going with the word "adventure". I'm sure you're thinking that too.

Nick spends these same weeks preparing the sailboat: Installing a VHF radio, setting up a solar array,  installing devices, repairing sails, running cables up the mast, and working on the 1983 9.9 HP Johnson engine: 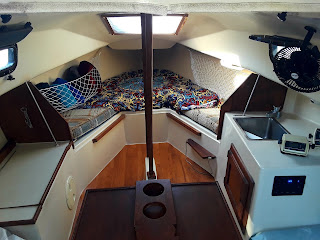 Wow, that is a HUGE Cabin for two people!? Right?!
Look how clean it is. 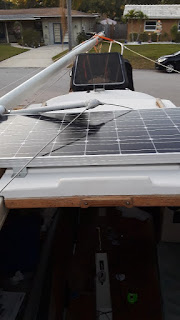 Okay, that is a bad-ass solar array.  Gives us power 100% of the time.
Our phones can stay charged as well as everything else on the boat.
Great job, Nick. 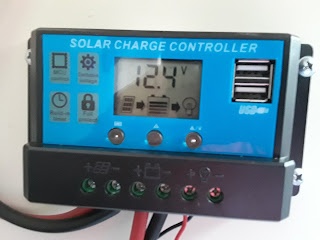 Solar Power.
I'm guessing we will have some sun in June in the Everglades. 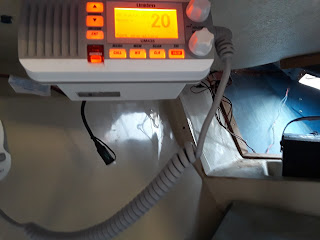 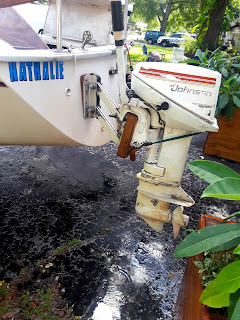 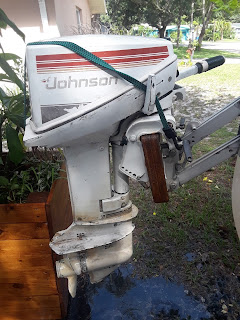 June arrives - the time has come - we're committed.  Yes, you are free to use that word metaphorically here.

If the boat looks small to you it's probably just the angle of this particular picture. 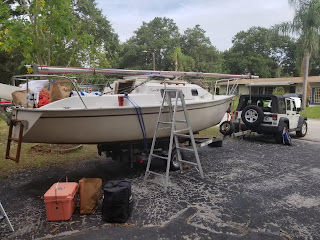 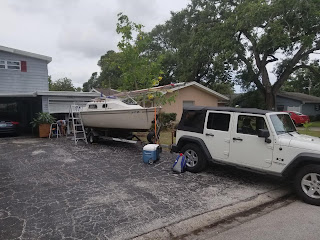 For the record, the sailboat IS bigger than the Jeep - but not by much.

So in the middle of the June summer (100+ degree heat, beginning of hurricane season, you know, perfect sailing conditions), I arrive in Clearwater where we all pack into Nick's Jeep, load the sailboat, and head out for our 6 hour drive down to the Keys. Nick's wife Nathalie (also the name of the sailboat) and her daughter follow us in their little-red car. 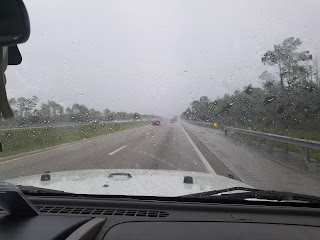 Rain, rain, everywhere. Lots of severe thunderstorms all across Florida. No way this is a bad omen.  The weather will improve.

Things go quite well until we pass Naples and start heading East across Alligator Alley towards Miami. We hear a loud "pop".

Nick and I look at each other, "Did you hear that?"

Damn, flat fire. The tire is shredded - and that is a brand new tire. It's raining, cars are whizzing past us at 85 MPH (the slower ones) and we have a guard-rail directly next to us. It is slippery. 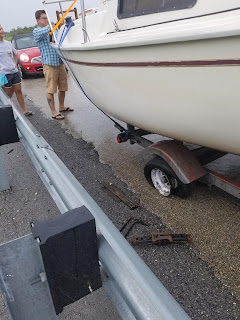 Work the problem....
I ask Nick where the lug-wrench is.
"Back of the Jeep, he replies". I pull it out.
Then I ask, "Nick, where is the lug nut wrench that actually fits the boat trailer lug nuts? Your Jeep lug nuts are much smaller."

......  Time passes while Nick spends time talking to AAA. They inform him that they don't work on boat trailers - and they won't be sending anyone out to us. Now I know why I'm not a AAA member.

Boat trailers:  God's true test of Men (I got that quote from Mike Wilson).

People ask me all the time, "How do you launch your boat?"
My reply is always the same, "By phone!"

Nick is obviously getting very frustrated with AAA. Standing on the side of the highway enjoying the rain, I have time to formulate a plan. Nick finally agrees with me. It simply isn't safe for us to all remain here on the side of the slippery highway in the rain. So Nick reluctantly unhooks the boat trailer, leaves it, and we all make an illegal U-turn in the median and return to Naples.

As soon as we enter WalMart, a storm from hell hits. Hey, at least we are all safe. Well, as safe as one can be in a WalMart. While WalMart does have lug-wrenches and a new Jack, they do NOT have any trailer tires that fit. The roof sounds like it is going to blow off from the storm.

Nick Googles, calls around and eventually finds "Custom Hitch & Trailer" about 7-8 miles from Walmart. Glory be, they have a tire that fits! But they close at 5. It is 4:40 p.m. We check-out our WalMart stuff and haul-butt. It has stopped raining. This particular storm has moved on. Storms are fierce down here!

We arrive at Custom Hitch & Trailer at 4:56 p.m. The guy that works there, possibly the owner, I'm not sure, is as nice as he can be. He suggests we purchase TWO trailer tires. Normally I hate being up-sold, but this is the easiest up-sell of my lifetime. In addition, this guy gives us his business card, writes his cell number on it, and tells us if we need him for our emergency in the next hour, that he will come help us. What an awesome dude! I intend to send him a "Thank You" card with a Visa gift card. Nice people rock.

We caravan back to the boat, but about 5 miles before we get to it, I see a "Road Ranger" truck in front of us - travelling in the same direction.

"Hey Nick, get in front of that guy. He'll help us". Nick has his doubts.

We arrive at the boat. The new lug nut wrench fits. I get four (out of five) of them off when, hello - the Road Ranger pulls up behind us. 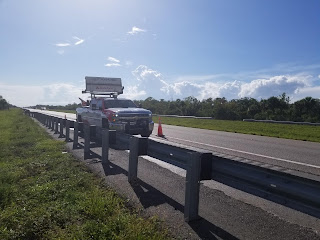 47 seconds later they have the new trailer tire installed. Well, okay, they have hydraulic, portable tire-changing tools. I could have done it in 10 minutes.  :-)  But, hey, I am more than happy to have assistance. Thanks gentlemen: 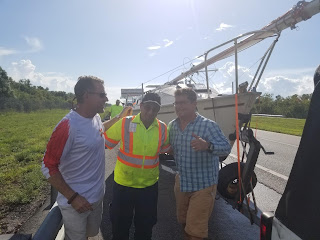 We tip the road-assistance boys and we are back on the road. Problem solved.

The boys are asleep in the back of the Jeep, the weather has cleared and we even are blessed with a double-rainbow: 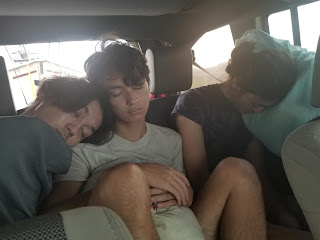 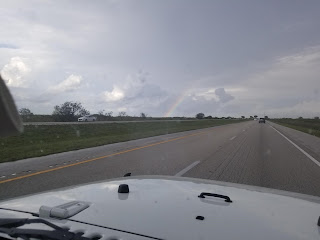 There is no way anything else bad could happen during this sailing adventure which has yet to begin.

Time for bed. We're all pretty tired. Nice job Nick getting us all here safely. I know you are tired dude. 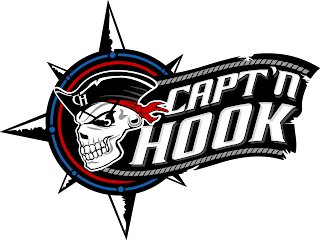