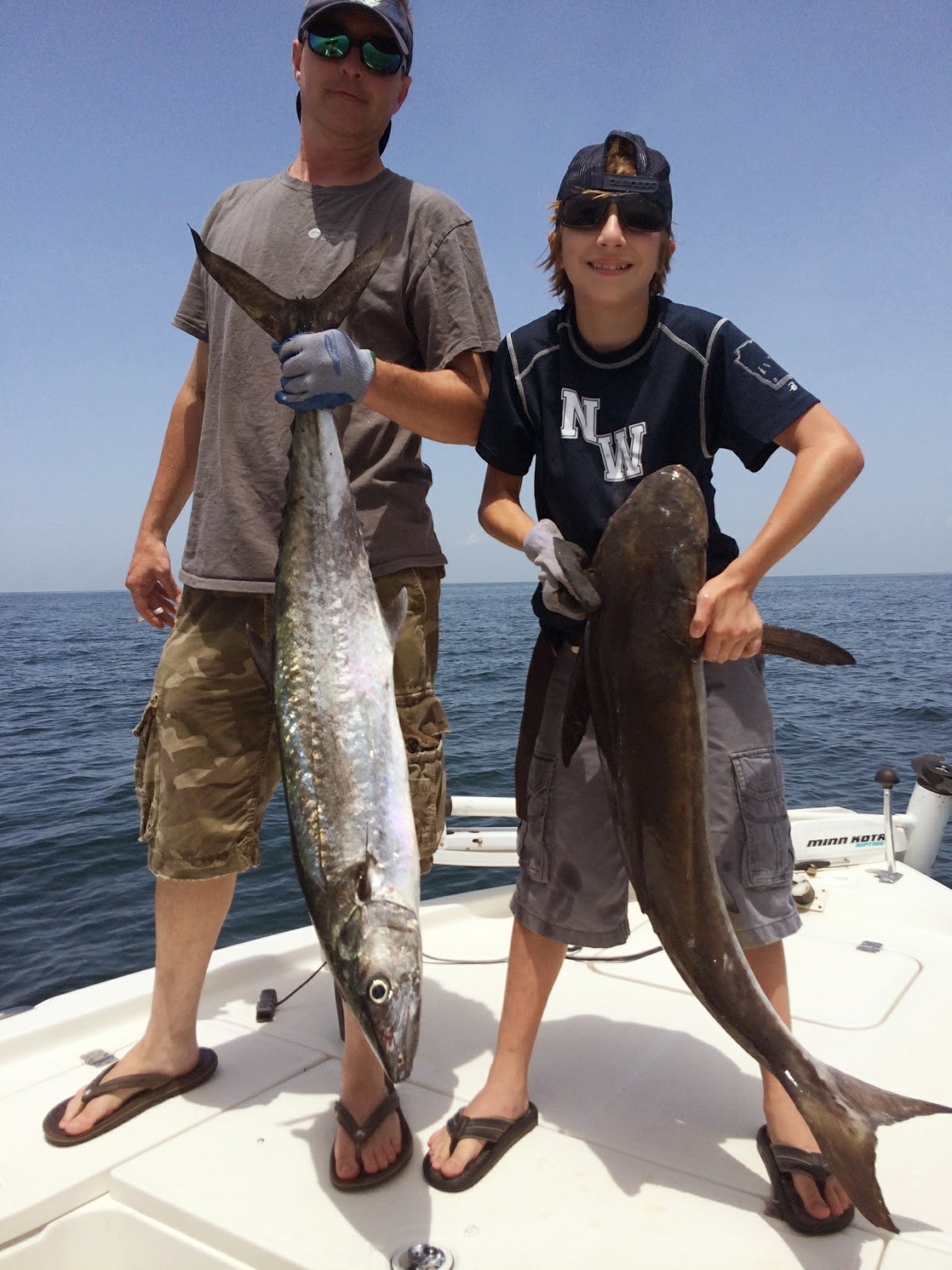 Good morning everyone.  Not a long blog this time.

A heart-felt "Thank You" again to everyone who takes the time to read.  This blog has surpassed 1900 page views now - closing in on 2000.  Thanks everyone.

I'm certain that I have written about "Action Jackson" before.  Bottom line:  This kid loves/lives to fish.  Now, I don't mean that he "really likes" to fish.  Its kind of an addiction for him.  This boy knows more about fishing than I do.  (which, honestly, isn't saying much).  I mean, he spends his entire weekend watching fishing shows (okay, so do I).  I have never met a kid that likes fishing as much as he does.  He has a good soul and is a kindred spirit.  So it is always a pleasure to have him (and his Dad) on my boat.

It is early Friday.  Gorgeous morning: 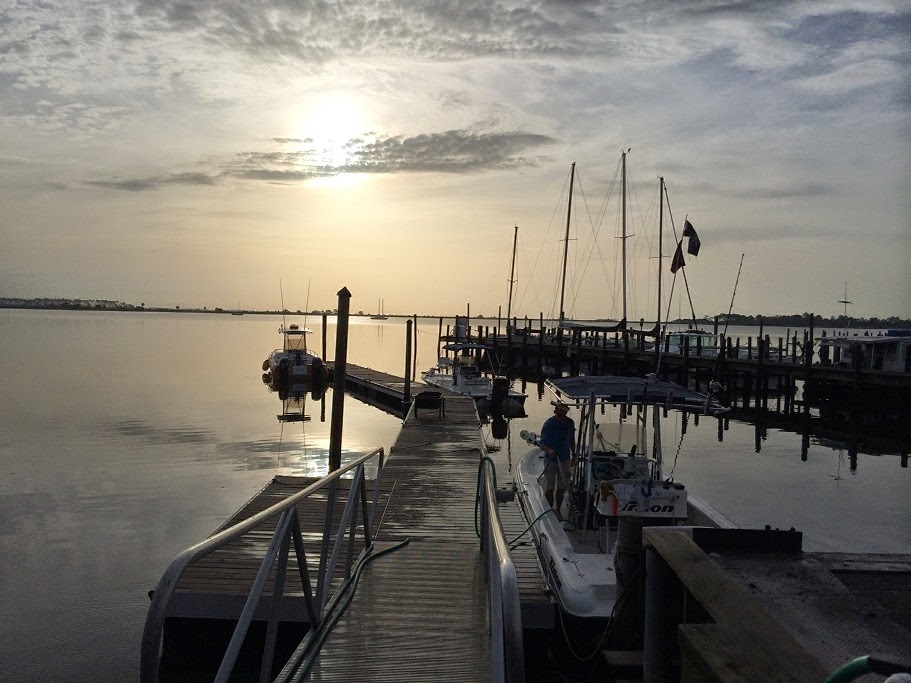 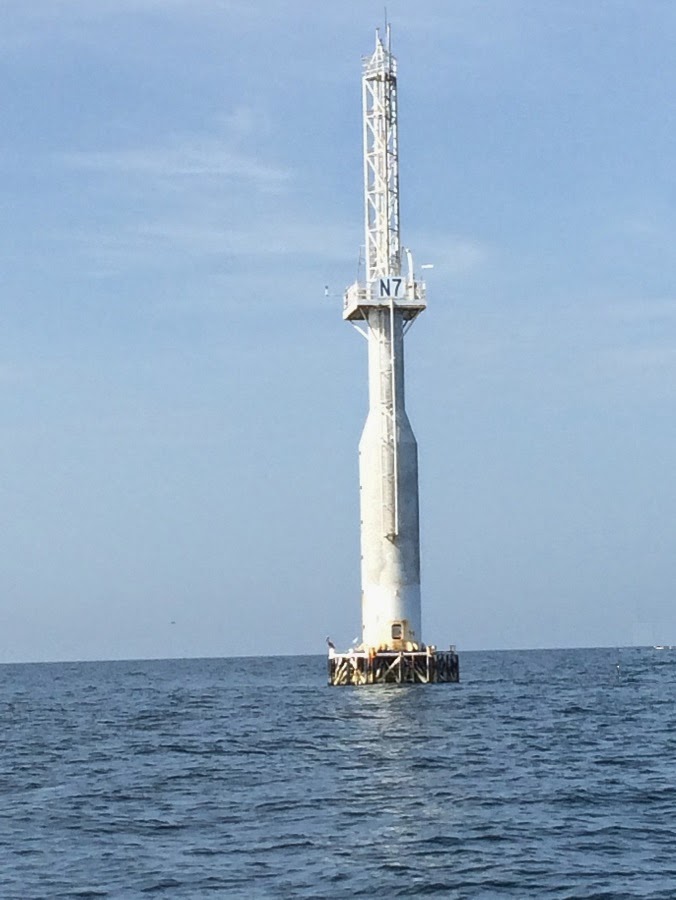 For those of you who don't know, the navigation towers in the North Gulf of Mexico are no longer used, but they were previously used by the Air Force for pilot training purposes.  Because they have so much structure under them, they are a haven for big, mean fish, and small scared fish.  Now, that's not to say that catching the fish that hang out there is easy.  It has taken me years to figure out how to attract fish to my line.  And on top of that, it has taken me even longer to figure out, once I get them on the line, how to keep them from munching through "said" line.  The fish we seek out here are BIG, and they have big teeth.

Tackle Today:
We are also using the downrigger.  Downrigger is set to 45 ft.


Another lesson I have learned:  "The first boat to K Tower wins".  That is why I prefer fishing on Fridays versus Saturday or Sunday.  There are very few boats out here on Friday, so the odds of being the first to the tower are much better.  In the summer at least, the "bite" seems to be "on" between 8 & 9 a.m.  After that, more boats show up and the fish simply stop biting.  I don't know if the fish have figured the boats out, or it just gets too hot for them.  Either way, its good to be the first one out there.  The biggest fish hit early and fast.
We decide to do the "bump and run".  By this I mean that we throw live bait out the stern, with no weight and I bump the throttle from neutral to forward every 30 seconds or so depending on the wind and current.  It takes a little practice.  So we are "kind of" trolling, but kind of not.

I really need to get that sound as the ring tone on my phone.


Now, for the 3 people who actually read my entire blog, you know that the last time we were at K Tower, (a couple of weeks ago) we mostly caught Amberjack.  Jim Pittman, of course, caught that huge smoker king, but mostly we caught lots of big Amberjack.  The bad news, Amberjack are closed in Federal waters.  In fact, almost everything is closed in Federal waters.  Wait:  Is Snapper open?  No, that is only open to recreational fisherman for 9 fricking days this year.  Of course, it is open to commercial fisherman all damn year.  Grouper - closed.  Snapper - closed.  Amberjack - Closed.  Salmon - Closed. (Okay, there are no obviously no salmon in the Gulf, but if there were, I'm sure that species would be closed).
Sorry, Capt'n Hook digresses.....
So, I forewarned my crew (father and son) that the odds are good that we will be throwing most of our fish back due to "regulations".  Still, there are worse things to do on a Friday than catching big fish and throwing them back.
But throwing big fish back simply isn't the case.  The first fish that hits the line:  Cobia.  (Big Cobia in fact - 36 inches at the fork).  Incredible job Jackson reeling that monster in.  I wish you could have seen his face after we landed it.  His first Cobia.  In the middle of the fight, which lasted about 5-7 minutes, it actually jumped completely out of the water.  That was cool.  Cobia are strong fish and they run like hell so Jackson had to use the entire boat to get it reigned in.  He did a great job by keeping pressure on the fish the entire time.


The next fish that hits the line:  King (For those of you who are keeping track of the biggest fish on my boat - no, it is nowhere near as big as Jim Pittman's king), but still, a very cool, large fish.  King run like crazy also.  I think father and son played a role in catching this guy.  Have I mentioned that it isn't easy to actually get these fish in the boat?
So, two big (keeper) fish in the boat and we've been out here less than an hour.  Who's your Daddy!

If you are keeping score, and I am sure Jackson is, Jackson's Cobia is bigger and fatter, than the King his Dad caught!

Up until this time in the early morning, Jackson has been relying on his father for quite a bit of the "crew" duties.  You know, putting the poles out, baiting, re-tying the leaders, etc.  Gene is busy on the bow and I turn around and see Jackson sitting on his 12-year old ass.  "Dude", I say, "What are you doing?" He looks at me quizzically.  "What, Mr. Marc?"  He is drinking a coke and neither of the trolling lines are in the water.  "You got crap to do little man, get off your lazy butt and get those lines in the water!  That one needs to be re-rigged, and the other two need to be baited and payed out.  I ain't paying you absolutely nothing so you can sit on your adolescent butt". I probably shouldn't be so hard on a 12 year old, but the life/fishing rules are slightly different, and more severe, 20 miles offshore.  If you wanna make the blog, you gotta earn it!  :-)

I don't care what age, or gender, you are, if you are going to be a fishing crew member on my boat - you got duties and responsibilities.  Now if you want to go "boating", I can accommodate you with a pleasant lunch and some sight-seeing, but come on, we are fishing for monsters at K Tower.  You got to be on your game out here - the Coke can wait until AFTER the lines are in.   After that, the boy stepped up his crew game just fine.

We actually had another big Cobia on the line and the next King we had on the line was huge, (I think bigger than Jim Pittman's), but Capt'n Hook lost him right there at the end.  My fault, not sure what I did wrong.  Fish don't count unless they actually make it into the boat.  That is a long-standing rule that comes from "Lake Cue".  I should probably share those rules with you sometime - they are kinda funny.

We did catch some Amberjack (which we threw back), and on the way back in, we stopped at my favorite Camp spot (thanks Camp - you fishing with us on the 11th?) and caught a ridiculous amount of Key West grunts and tasty Rock Bass.  By 1 p.m., the cooler was full of fish, so we decided to call it a "short" day and head back to Rock Landing Marina.

Oh, and one of the great things about Mad Anthony's Bar & Grille at Rock Landing Marina, is they will cook the fish you just caught.  (Yes, they still charge you), but still, it doesn't get any better than that.  Here we are eating freshly grilled and blackened Cobia: 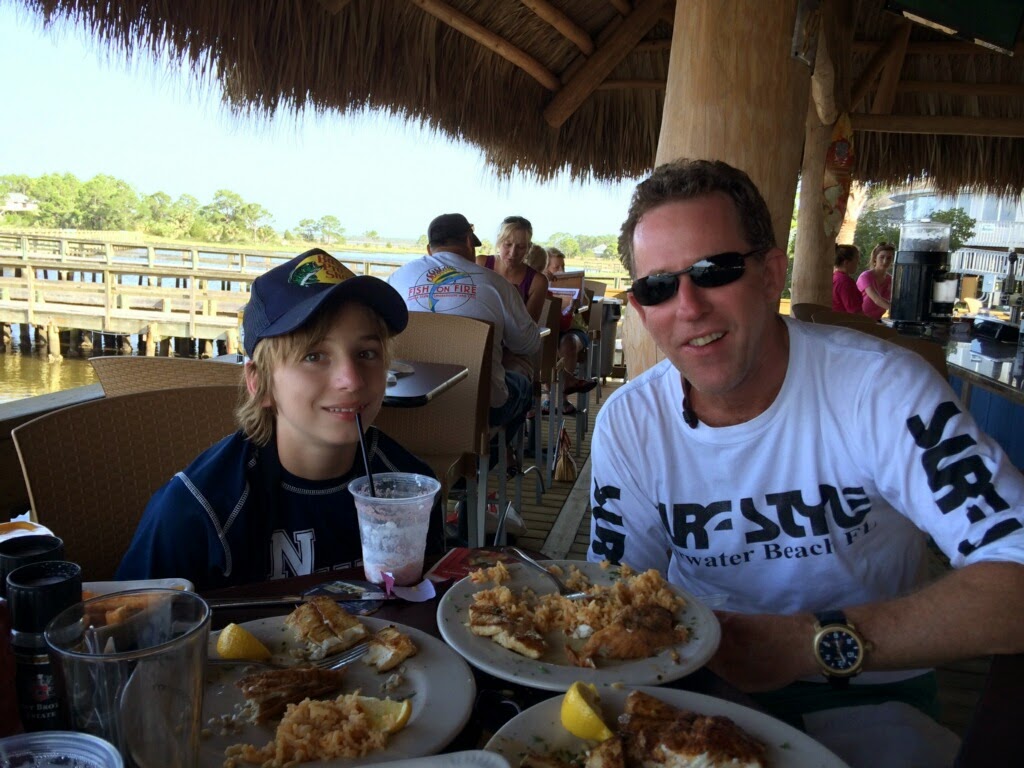 We had ourselves a little mini-feast.

Jackson:  You're a good kid. You're welcome back on my boat anytime.  Nice job. 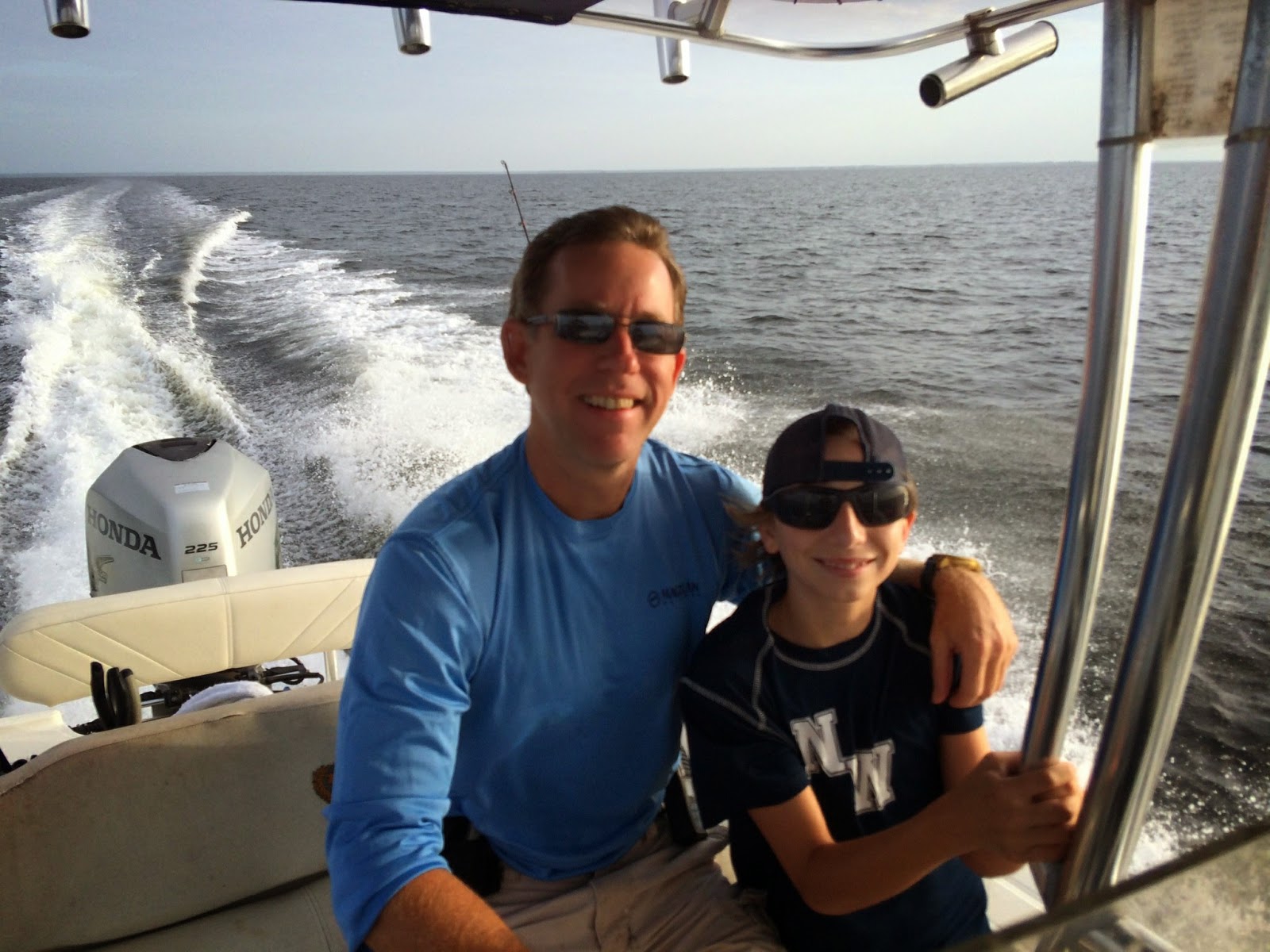 Thanks for taking all the pictures Gene.

Have a great and safe 4th of July everyone! 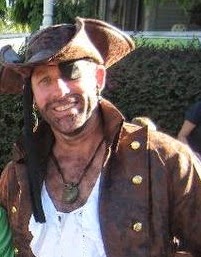