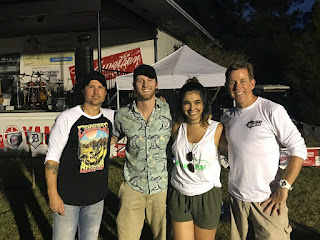 That would be me - 2nd from the left in the picture above. My name is Josh and the "mighty" Capt’n Hook has made the somewhat questionable decision of letting me join in on the fishing (and filming) action. I will be following him and his crew(s) on their ventures out to sea this summer to attempt to capture some fun, exciting, and educational moments on video (keyword being “attempt”). A little about me: I’ve lived in Florida most of my life, with 4 years in Dallas, Texas. I’m currently attending FSU with a major in editing, writing, and media. I met Marc through my girlfriend, and his employee, Erica. Here’s the part that makes this all so exciting: I’ve never been on more than a pontoon boat and my life’s fishing experience peaked when I caught a white crappie. So this should be fun right?

Rock the Dock 2017 was the first event I attended in Panacea.
Erica and I hopped in her little Chevy Spark and headed south out of Tallahassee. After about 45 minutes of me trying to drive her go-kart/ car, we made it to Panacea. We parked and met up with Capt’n Hook.  He took us around to get some food, beer, and a seat. We ate for a little bit until I realized that I already wasn’t doing what I was hired to do, so I pulled out the camera and started filming. I eventually met Gene, Mike, Sam & SJ. We all hung out for a little bit; I made sure to periodically pull out the camera to catch Tobacco Rd. Band playing on stage and the crowd dancing.

As the night progressed, we headed to the local bars and had a few drinks out by the boat. Sufficiently lubricated, we returned to the Capt’n Hook Crack Shack, which, contrary to initial assumption, was actually really cool!  Erica left to head back to Tallahassee before crew bedtime. But things would be too easy if I didn’t mess up, so of course I had to let Erica leave with the camera’s battery. It’s okay though; she came back with the battery and only a little bit of animosity (okay, she was pissed…sorry Erica). I put everything to charge and we all passed out till morning.

5:30 am the next morning George Thorogood graced us with his "Bad to the Bone" presence as Sam’s phone ring-tone rang loudly from his pants pocket.  After kicking a couple bags Mike turned it off and went to brew some coffee. The morning was calm and quiet as everyone was reminded that we had been drinking the night before. Eventually, everyone managed to gather all their supplies, get some food, and take the short ride to the marina.

I had only seen the boat at night, so seeing it that morning gave me a whole new perspective. The Hook sure does know how to pick a pretty boat! I started walking around the dock, filming the boat at different angles when, through the camera lens, I see Sam kick the boat away from the dock. They were already leaving without me! I threw my bag on board and jumped (barely) into the boat. We eased our way out of the marina and el Capitan punched it. We headed out to the Gulf on a nice, near-flat, water highway. Unfortunately, the water didn’t stay flat for long. Out of the channel, we started hitting some waves. 1-foot waves turned into 2; 3 foot waves turned into 4; and steady legs turned into jelly against upward jolts.

Staying towards the back of the boat kept me secure, but, me being brilliant, decided I just NEEDED to get that shot of the water from the front of the speeding boat. How cool right? Wrong. Very wrong. Oh wow was I wrong. I slid past Mike on the left side of the boat-- wait, starboard… I mean port… yeah, the port side of the boat. I tried to time my jump to the bow of the boat when I hear Mike yell, “Now!” I almost flew off when I saw the wave hit the boat and jerk the bow 5 feet higher. Mike, behind me, laughed, after almost tricking me into being thrown off the boat just 10 minutes into our trip.  New guy hazing ritual?

Finally I made it to the front, which resulted in me death-gripping the boat railing while trying to film the water racing by us. It was like riding a bull up there. The hull would disappear from underneath me and then immediately show up again, but 3 feet higher than before. It was a ride. Don’t worry though, I only hurt myself a little; I didn’t need my right ankle anyway. After basically army-crawling to the back of the boat, the rest of the crew said they wished they had a camera to film me attempting to film them. That footage would definitely be AFV worthy.

The boat slowed to a stop and, while trying to make some course decisions, the GPS stopped working. I looked around wondering why no one was panicking. I was sitting there thinking, “Oh, okay, so we’re all going to die, awesome!” Around me everyone else was going about their regular business, planning the course, securing ropes, rods, etc. Even SJ, Sam’s 9 yr old son, just went back to sleep on the beanbag chair. I’m sorry, am I really the only one writing a note and emptying a bottle for potential rescue? Turns out having a certified captain on board is actually pretty handy. This guy knows how to get us just about anywhere without the instrument I deem as critical. And here I was ready to go out on this boat before I knew any of his credentials.

I regained my mentality, the GPS somehow started working again, and the guys re-plotted our course. We flew across the water for 15 more minutes to our first fishing spot. After all the anticipation, we were all let down when no fish came to hang out. We stayed at the spot for a bit longer, then moved on to a hopefully more prosperous location. And soon enough, we found one! After anchoring, the crew cast out into the water. After about a minute, fish came in the boat faster than I could keep track. I ran around the boat, doing everything I could to not knock something or someone else in the water. I’m not a massive guy by any means, but slipping a 5’11, 180 lb body around 7 other people, 20 something rods, and 100’s of sharp hooks, while filming and not interfering is amusingly difficult. Looking back at the footage I found myself, filming between legs, leaning off the side of the boat, and with both feet in the air holding onto the boat while fish flapped under me on the deck. It was definitely a challenge; like an obstacle course on a teeter-totter from grade school.

At one point in the journey, I noticed things that didn’t quite make sense. For example, I noticed Sam had been periodically laying down on the bean bag, breathing slowly. I also noticed Gene eating and drinking with less than a minute between bites and sips. SJ, with all the energy in the world, even slowed down a bit. Initially, these were just small things I noticed. Mind you, I was still gaining my sea legs, so I focused on that. Looking to try out a different microphone, I headed into the very small cabin where the equipment was stored. The little door shut behind me, I sat down, and began to rummage through cases, attach the microphone, and navigate through various screens to activate it. At some point while I was down there, my stomach decided it no longer appreciated the rolling of the waves. “Oh… So that’s what everyone else is getting hit with!” Crawling back out to the deck of the boat, I began a new battle of fighting my stomach. Lucky for me, I don’t seem to have too many issues when it comes to seasickness, but even the experienced guys were having trouble. I’m not sure who, if anyone, threw up off the side of the boat, but I didn’t and that’s what matters! I’m cool with being the new guy, but I didn’t want to be “that” new guy. By the end of the trip, only Capt’n Hook and Megan stood the test of time. I’m not saying he was lying, but the Hook wasn’t drinking all that fast when we got back to the marina…

We tried a few different things throughout the trip: bottom fishing, trolling and spin fishing. Trolling and spin fishing seemed ineffective so all of the glory came from the bottom. We would have pushed on for a bit longer but, like I said, seasickness becomes a huge factor when waves hit 7-8 feet. After a quick and unanimous poll on the matter, we headed back in early to enjoy the safety of stationary land. The waves were "with us" as we headed back in. I actually thought this would be a great thing, mentally picturing the boat acting like a surfboard riding the waves. Turns out this is actually, like, really dangerous. About this time is when I unfortunately learned what the term “broaching” means. I just thought we slid down a wave, no big deal. This left me wondering why everyone else on board was very concerned (I didn't like how this was exactly the opposite reaction of when the GPS stopped functioning). The captain slowed us down a little bit to keep us under control, only having to combat similar waves a few more times.

We all, obviously, made it back alive and wobbled onto the dock. Our ending take was mostly gag grouper, key west grunts and rock bass, with a few extra surprises. We all sat along the side of the bar and talked as the Marina moved the boat to the rack for cleaning.
After my first offshore fishing trip, I learned a few important things.

Those are just a few of the big ones. After just one trip with Capt’n Hook I already feel significantly more comfortable on a boat. Not completely comfortable, mind you, I'm sure that will take many more outings. But all in all, they took a newbie somewhere potentially very dangerous, and kept me very safe. I look forward to more opportunities to blindly hop on a boat and miraculously survive while catching some cool stuff on film for all your readers (and viewers)

Thanks again to Capt’n Hook and his crew for keeping me alive and showing me the ropes - and for not messing with me - Mike.

I'll be posting more videos soon of our latest trip, but I have finished editing a few of them and so I have posted a few new ones on the Capt'n Hook You Tube channel.  You can see at least three new ones by clicking here.